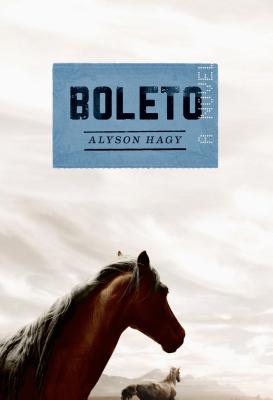 Armed with stories and the confidence of youth, he devotes himself to her training—first, in the familiar barns and corrals of home, then on a guest ranch in the rugged Absaroka mountains, and, in the final trial, on the glittering, treacherous polo fields of southern California.

“Hagy follows modern-day Wyoming cowboy Will Testerman on his simple quest: to make his way in the world through his gift for working with horses, and to prove he can spot raw talent by training a quarter horse, bought cheap, into a polo pony he can sell for riches . . . Will himself is an endearing character, everything you'd want in a cowboy--honest, forthright, polite, capable, modest, yet not so squeaky clean that he makes your teeth ache. In language that is lucid and true, Hagy tells his story, one that will resound with readers long after Will Testerman rides off into the sunset.” —The Dallas Morning News

“Even if you are not a horse person, Boleto will move your spirit.” —Chicago Tribune

Alyson Hagy was raised on a farm in the Blue Ridge Mountains of Virginia. She is the author of two previous novels and four collections of stories, most recently Ghosts of Wyoming. She lives and teaches in Laramie, Wyoming.
Loading...
or
Not Currently Available for Direct Purchase