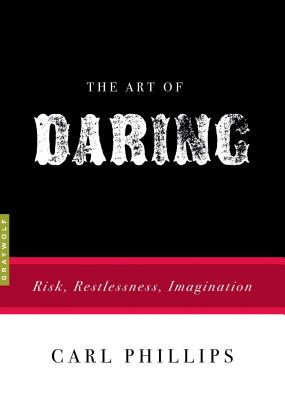 The Art of Daring

The award-winning poet Carl Phillips's invaluable essays on poetry, the tenth volume in the celebrated Art of series of books on the craft of writing

In seven insightful essays, Carl Phillips meditates on the craft of poetry, its capacity for making a space for possibility and inquiry. What does it mean to give shapelessness a form? How can a poem explore both the natural world and the inner world? Phillips demonstrates the restless qualities of the imagination by reading and examining poems by Ashbery, Bogan, Frost, Niedecker, Shakespeare, and others, and by considering other art forms, such as photography and the blues. The Art of Daring is a lyrical, persuasive argument for the many ways that writing and living are acts of risk. "I think it's largely the conundrum of being human that makes us keep making," Phillips writes. "I think it has something to do with revision—how, not only is the world in constant revision, but each of us is, as well."


Praise For The Art of Daring: Risk, Restlessness, Imagination (Art of...)…

“A writer's (and a reader's) manifesto, a testament to the importance of taking risks. . . . So many of [The Art of Daring's] points, its arguments, cross the blurry lines of genre to situate themselves at the center of why we read and write.” —Los Angeles Times