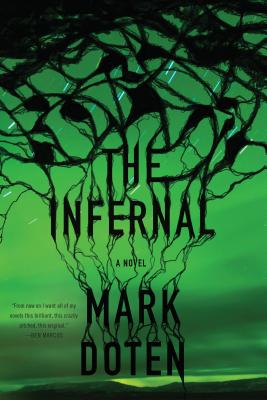 A fierce, searing response to the chaos of the war on terror—an utterly original and blackly comic debut

In the early years of the Iraq War, a severely burned boy appears on a remote rock formation in the Akkad Valley. A shadowy, powerful group within the U.S. government speculates: Who is he? Where did he come from? And, crucially, what does he know? In pursuit of that information, an interrogator is summoned from his prison cell, and a hideous and forgotten apparatus of torture, which extracts "perfect confessions," is retrieved from the vaults. Over the course of four days, a cavalcade of voices rises up from the Akkad boy, each one striving to tell his or her own story. Some of these voices are familiar: Osama bin Laden, L. Paul Bremer, Condoleezza Rice, Mark Zuckerberg. Others are less so. But each one has a role in the world shaped by the war on terror. Each wants to tell us: This is the world as it exists in our innermost selves. This is what has been and what might be. This is The Infernal.


Praise For The Infernal: A Novel…

“Doten's debut is the most audaciously imaginative political novel I've ever read. . . . The sheer poundage of originality is remarkable.” —The New York Times Book Review

“[A] prodigious, provocative debut. . . . Touched by brilliance throughout.” —The Washington Post

“To Doten, information is the soul; it is inside us, and it is evil. . . . Doten has written a ravishingly mad post-Bush riposte to the collaboratively written Internet text-the Wiki, which doesn't document facts so much as it documents the process by which 'facts' are generated and then perpetually overwritten.” —Harper’s Magazine

“Vicious and commanding. . . . Legitimately thrilling inventiveness and wild, dark humor. . . . Doten has created an impressionistic map of the atomized imperial realities of the War on Terror, and it is every bit as harrowing to consider as the inane and bloodthirsty era it depicts.” —The Believer

“A military database of privileged information, culling the War on Terror and Facebook's death march into a high-level rolodex of worlds within our world. A great and hopeful mark for the direction of 2015, where anything can happen.” —VICE

“The Infernal is an expression of American derangement, but it's also a knowing one. I'll admit: it's not easy to tell whether its author is psychotic or if he-like the charred boy at the center of his novel-is simply channeling American psychosis. The proof of the latter, I think, lies in the novel's allusive and often brilliant prose, which marks it as a compendium of known unknowns, one that points to a new generation of war novels wherein meaning itself has been sanitized and redacted, and where it might yet again be redeployed.” —Flavorwire

“A stylish, surreal portrait of a 21st century gone mad. . . . This book is a considerable achivement . . . of nerve, scope and ambition. . . . Doten's dazzling novel shows off his intellect and facility with language.” —Kirkus Reviews, starred review

“Doten has written a ravishingly mad post-Bust riposte to the collaboratively written Internet text-- the Wiki, which doesn't document facts so much as it documents the process by which 'facts' are generated and then perpetually overwritten.” —Josh Cohen, Harper's Magazine

“In Doten's artfully deranged debut novel, the 'war on terror' is revisited as a feverish science-fiction odyssey. . . . Doten frames his post-historic 'memory index' in virtuosic, antic prose, but his goal is neither purely satire nor surrealism for its own sake. Rather, [The Infernal] constructs a new language to confront atrocity and becomes in the bargain a story that truly thinks outside the cage.” —Publishers Weekly

“Mark Doten has fashioned a thrilling, idiosyncratic attack on the mytho-historical madness of our time. The Infernal is a brave, crazy, magnetic debut.” —Sam Lipsyte

“The Infernal is insane. Mark Doten turns his war criminals into the lecherous cartoons they might really be, as if the Warren Report were a drugged-out musical. From now on I want all of my novels this brilliant, this crazily pitched, this original.” —Ben Marcus, author of The Flame Alphabet and Leaving the Sea

“Serious, future-altering genius.” —Denis Cooper, author of The Marbled Swarm and The Sluts

“The Infernal is a tremendous novel: tightly controlled, swift and intelligent, compelling and suspenseful. Mark Doten holds a mirror up to society, showing us not only what it means to live in a post 9/11 world, but what it means to be human. I loved this book.” —Molly Antopol

“Mark Doten is a tremendous and protean talent. The Infernal--monstrous and resplendent--is an essential novel of the war on terror, which Doten renders plainly as the cacophonous self-made Hell that it plainly is. His demonic vision reveals crucial and damning truths.” —Justin Taylor, author of The Gospel of Anarchy

“From the first page to the last, [The Infernal] explodes like a roll of Black Cats in a dazzling, deafening, brilliant display of linguistic and intellectual energy. It will thrill you, confound you, and ultimately force you to submit to its perspective, and in the end it will change the way you think about the world you live in.” —Dale Peck, author of Martin and John

Mark Doten's writing has appeared in Conjunctions, Guernica, The Believer, and New York magazine. He has an MFA from Columbia University and is the recipient of fellowships from Columbia and the MacDowell Colony. He is currently a senior editor at Soho Press and lives in Brooklyn.