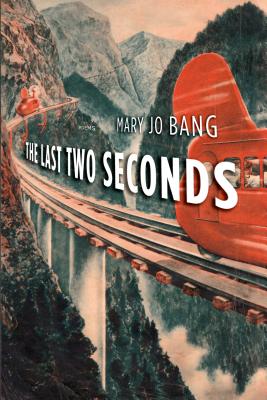 We were told that the cloud cover was a blanket
about to settle into the shape of the present
which, if we wanted to imagine it
as a person, would undoubtedly look startled—
as after a verbal berating
or in advance of a light pistol whipping.
The camera came and went, came and went,
like a masked man trying to light a too-damp fuse.
The crew was acting like a litter of mimics
trying to make a killing.
Anything to fill the vacuum of time.
—from "The Doomsday Clock"

The Last Two Seconds is an astonishing confrontation with time—our experience of it as measured out by our perceptions, our lives, and our machines. In these poems, full of vivid imagery and imaginative logic, Mary Jo Bang captures the difficulties inherent in being human in the twenty-first century, when we set our watches by nuclear disasters, species collapse, pollution, mounting inequalities, warring nations, and our own mortality. This is brilliant and profound work by an essential poet of our time.

“Bang addresses sources of doom that are not our fault (mortality) and those that are (climate change); her pessimistic conclusion draws on cultural lodestones from Virginia Woolf and Franz Kafka to Walter Benjamin and Cyndi Lauper. Attentive readers who delve into Bang's sharply articulated vision will find them unforgiving indeed--and those same readers will praise her to the skies.” —Publishers Weekly, starred review

“As life continues to speed along, the world seems to be an elaborate myth. . . . [Bang] never takes her foot off the accelerator. Gorgeous phrasing and imaginative leaps make the ride worthwhile.” —Washington Post

“Bang can be an ingenious phrase maker, startling English out of its idiomatic slumber with subtle, deliberate awkwardness.” —The New York Times Book Review on Mary Jo Bang

Mary Jo Bang is the author of six previous books of poetry, including Elegy, winner of the National Book Critics Circle Award. She has also published a celebrated translation of Dante's Inferno. She teaches at Washington University in St. Louis.