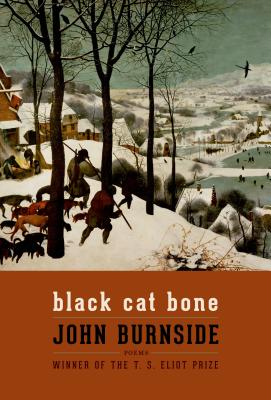 Winner of both the T. S. Eliot Prize and the Forward Prize, Black Cat Bone is the first American publication of the poetry of John Burnside

Before the songs I sang there were the songs
they came from, patent shreds
of Babel, and the secret
Nineveh of back rooms in the dark.

Hour after hour
the night trains blundered through
from towns so far away and innocent
that everything I knew seemed fictional:
—from "Death Room Blues"

John Burnside's Black Cat Bone is full of poems of thwarted love and disappointment, raw desire, the stalking beast. One sequence tells of an obsessive lover coming to grief in echoes of the old murder ballads, and another longer poem describes a hunter losing himself in the woods while pursuing an unknown and possibly unknowable quarry. Black Cat Bone introduces American readers to one of the best poets writing across the Atlantic.

“John Burnside's Black Cat Bone arrives in America as one of the most feral British collections of poems I've read in years. His voice is shot through with its own lyric genius, one that ruptures and raptures, hunts and hurts, and haunts and heals. The poems are bloodwarm, lucid, even in what he calls ‘the curdled glaze of everafter.' He dares to sing of Song. He marries grace to gall. His daylight is carrion, he writes, but the light he casts at night is almost velvet to the touch. And he's a sneaky jackal of a formalist, tenderly rendering, stealthy and beguiling all at once. These poems provoke an ‘infinite kinship' with their reader. I am utterly taken with Burnside's hand and craft and heart.” —Lucie Brock-Broido

“The mystery of how this volume could be--after more than a dozen collections in the UK, not to mention novels, memoirs, short stories, and essays--the first book of John Burnside's poems to appear in the US is now immaterial. Black Cat Bone is Burnside at his best, and its appearance will make its readers want more. He is a poet of 'the sonar that runs in the spine.' He is, in other words, deeply in touch with what it means to walk upon this earth, and he delivers regularly electrifying expressions of the condition we call human. 'The only gift,' he writes, 'is knowing we belong / to nothing.' Now, however, his poems can belong to us, and that is something to celebrate. It's a gift, from one of the most important poets in the language.” —Robert Wrigley

“If genius is operating anywhere in English poetry at present, I feel it is here, in Burnside's singular music.” —Adam Thorpe, The Observer on John Burnside

“[Burnside's] radiant meditations have been perhaps the most quietly and pervasively influential voice to have emerged in British poetry in the last twenty years.” —Don Paterson, New British Poetry on John Burnside

JOHN BURNSIDE has published five works of fiction and nine collections of poetry, including The Asylum Dance, which won the 2001 Whitbread Poetry Award.
Loading...
or
Not Currently Available for Direct Purchase