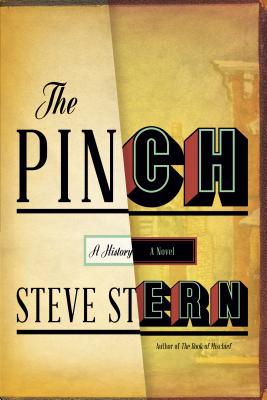 A dazzling, spellbinding novel set in a mythical Jewish community by the acclaimed author of the New York Times Notable Book The Book of Mischief

It's the late 1960s. The Pinch, once a thriving Jewish community centered on North Main Street in Memphis, has been reduced to a single tenant. Lenny Sklarew awaits the draft by peddling drugs and shelving books—until he learns he is a character in a book about the rise and fall of this very Pinch. Muni Pinsker, who authored the book in an enchanted day containing years, arrived in the neighborhood at its height and was smitten by an alluring tightrope walker. Muni's own story is dovetailed by that of his uncle Pinchas Pin, whose epic journey to North Main Street forms the book's spine. Steve Stern interweaves these tales with an ingenious structure that merges past with present, and his wildly inventive fabulism surpasses everything he's done before. Together, these intersecting stories transform the real-world experience of Lenny, whose fate determines the future of the Pinch, in this brilliant, unforgettable novel.

Steve Stern, winner of the National Jewish Book Award, is the author of several previous novels and story collections, including The Book of Mischief and The Frozen Rabbi. He teaches at Skidmore College in upstate New York.


Praise For The Pinch: A Novel…

“The Pinch-for many years in the early 20th century a predominantly Jewish section of Memphis-has found its Whitman and its Faulkner in Stern, who's written a stylistically effusive, verbally extravagant novel. . . . Audacious, hilarious, unabashed fiction.” —Kirkus Reviews on The Pinch

“Stern's stories are suffused with nostalgia for this lost world . . . Nothing goes unobserved.” —The New York Times Book Review on The Book of Mischief

“Filled with pathos and humor . . . At its most poignant, Stern's writing . . . peels away at the membranes that divide the present from the past.” —The New Republic on The Book of Mischief

“[A] wonderfully entertaining, inventive new novel . . . Laugh-out-loud funny, the sort of humor that takes you by surprise.” —NPR on The Frozen Rabbi

“Packed to bursting with epic adventure and hysterical comedy, with grim poignancy and pointed satire . . . Stern embraces every outrageous possibility, in lush, cartwheeling sentences.” —The Washington Post Book World on The Frozen Rabbi