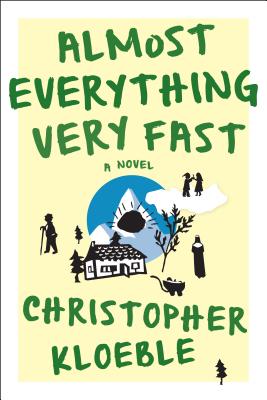 Albert is nineteen, grew up in an orphanage, and never knew his mother. All his life Albert had to be a father to his father: Fred is a child trapped in the body of an old man. He spends his time reading encyclopedias, waves at green cars, and is known as the hero of a tragic bus accident. Albert senses that Fred, who has just been given five months left to live, is the only one who can help him learn more about his background.

With time working against them, Albert and Fred set out on an adventurous voyage of discovery that leads them via the underground sewers into the distant past--all the way back to a night in August 1912, and to the story of a forbidden love.

Almost Everything Very Fast, Christopher Kloeble's U.S. debut, is a sensitive and dramatic family saga and page-turning road novel all in one.


Praise For Almost Everything Very Fast: A Novel…

“Cleverly structured [and] consistently well written, and it vividly evokes a place—Bavaria’s ‘alpine uplands’—that many of us have never visited.”—Star Tribune

"This is a beautifully realized, cleverly plotted story of an unconventional family and what its members call their ‘most beloved possessions.’ Filled as it is with memorable characters about whom readers will care immensely, the story is absorbing throughout and deeply satisfying.”—Booklist

“The characters are captivating, the atmosphere tense, and the descriptions fascinating. Kloeble’s quirky, dark, and heartbreaking novel is difficult to put down, and impossible to forget.”—Historical Novel Society

“Almost Everything Very Fast is ingeniously structured, intelligently written, and moves at a steady, forceful pace. It is entirely enjoyable, from start to finish.”—Ha Jin

“With gorgeous prose and a delicious sleight-of-hand that makes his ensemble cast sparkle as brightly as his plot, Christopher Kloeble spins a tale that brings home the truth that the past is much closer than we imagine it to be. Few novels are as satisfying at the end as they are at the beginning and Kloeble nails it.”—Ru Freeman

“A bright and heartwarming coming-of-age novel, whose virtuosic language keeps you enthralled from the first to the last page. At the end, you want to take the protagonists home with you.”—Brigitte Extra (Germany)

“A love story, a crime novel, a time document. A great piece of literature.”—Christine Westermann

Christopher Kloeble is an award-winning German novelist and scriptwriter. Almost Everything Very Fast is his third book, and his first to be published in English. He lives in Berlin and New Delhi.
Loading...
or
Not Currently Available for Direct Purchase