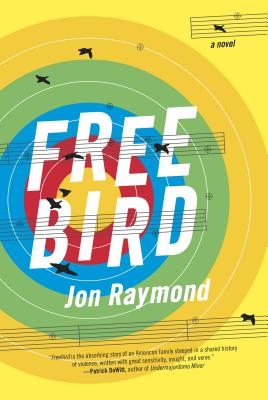 “This multigenerational story is a road-trip novel, an ecological disaster drama, and a harrowing post-Iraq War PTSD portrait all rolled into one highly readable, gorgeously written book. Raymond tells this story peering over the shoulders of three strong characters, each of whom have to reconcile feelings of love -- both romantic and familial -- with the brutal realities of life during wartime. Despite its dark turns, Freebird is a book filled with hope for its characters as well as love for the real world it ably attempts to recreate and offer respite from.”
— John Francisconi (E), Bank Square Books, Mystic, CT
View the List

A page-turning new novel from the author of Livability, winner of the Oregon Book Award

The Singers, an all-American family in the California style, are about to lose everything. Anne is a bureaucrat in the Los Angeles Office of Sustainability whose ideals are compromised by a proposal from a venture capitalist seeking to privatize the city’s wastewater. Her brother, Ben, a former Navy SEAL, returns from Afghanistan disillusioned and struggling with PTSD, and starts down a path toward a radical act of violence. And Anne’s teenage son, Aaron, can’t decide if he should go to college or pitch it all and hit the road. They all live inside the long shadow of the Singer patriarch Grandpa Sam, whose untold experience of the Holocaust shapes his family’s moral character to the core.

Jon Raymond, screenwriter of the acclaimed films Meek’s Cutoff and Night Moves, combines these narrative threads into a hard-driving story of one family’s moral crisis. In Freebird, Raymond delivers a brilliant, searching novel about death and politics in America today, revealing how the fates of our families are irrevocably tied to the currents of history.


Praise For Freebird: A Novel…

“[Freebird is] the rare work of fiction that feels more timely with each passing moment.”—Seattle Weekly

“Thanks to Raymond's loose, masterful style, Freebird is an arm wrestling match between hilarity and heartbreak.”—Interview

“Freebird’s structure is a symmetrical braid, wrapping the experiences of underappreciated Los Angeles city employee Anne Singer, her Navy SEAL brother Ben, and Anne’s just-post-high-school son Aaron around one another, tighter and tighter, until they finally come together in a frayed ending that’s as satisfying as it is genuinely shocking. Freebird contains one of the most moving and not-at-all cheesy depictions of the afterlife I remember reading. Most authors simply don’t go there, but Raymond does. And thank God for that.”—The Los Angeles Review

“Raymond rotates between Anne’s, Ben’s and Aaron’s points of view, his gallows humor and psychological acuity informing the action of every character. . . . His descriptive powers. . . pull you into a kind of sensuous ambiguity that’s as seductive for the reader as it is for his characters. . . . The biggest impression the book leaves is of a novelist reaching the height of his powers.”—The Oregonian

“The arrival of Freebird requires that you set aside all New Year plans and dive in without delay. . . . A darkly relatable amorality tale from a skilled storyteller.”—Portland Monthly

“An original, provocative, and intriguing story. . . . A powerful and tender family drama.”—Publishers Weekly

“Raymond . . . [explores] the qualities that make us human and the strong family bonds that hold us together.”—Booklist

“Jon Raymond’s wonderful new book Freebird poetically wrestles with the big and the small: how globalization and international conflicts reconcile with the personal; how the amorality of war affects individual psyches; how impulsive post adolescence mirrors impulsive old age. And the undercurrent of this increasingly suspenseful story is a fascinating discussion of environmental mutilation, at once a tangle of benign bureaucracy and calculated avarice, which Raymond tackles with equal parts sensitivity and expertise."—Jesse Eisenberg, author of Bream Gives Me Hiccups

“Freebird is such a timely book, considering the current deep divisions between right and left. A new classic for the collapsing political landscape of America.”—Kim Gordon, author of Girl in a Band

“Freebird is an intelligent and absorbing multi-generational story of an American family, written with great sensitivity, insight, and verve.”—Patrick deWitt

“Beautifully written, precisely observed, and morally engaged. In the Singer family, Jon Raymond has composed a kind of generational fugue on the theme of how to do some good in a grim world—how to fight back against evil without compounding that evil.”—Jonathan Dee, author of A Thousand Pardons

“No one writes sentences so graceful and characters so achingly real as Jon Raymond. Sometimes sad, sometimes hilarious, oftentimes at the same moment, Freebird is the gripping story of a dysfunctional family through which we better understand these dysfunctional times.”—Benjamin Percy, author of Thrill Me

Jon Raymond is the author of two novels, Rain Dragon and The Half-Life, and the short-story collection Livability. His work has appeared in Tin House, The Village Voice, Bookforum, and other places. He lives in Portland, Oregon.
Loading...
or
Not Currently Available for Direct Purchase