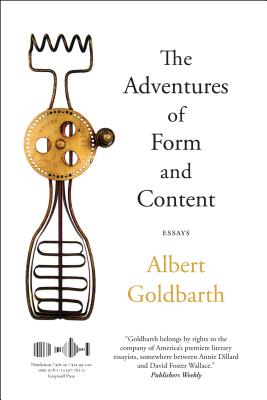 An astounding work of doubles by Albert Goldbarth, “a dazzling virtuoso who can break your heart” (Joyce Carol Oates)

Albert Goldbarth’s first book of essays in a decade, The Adventures of Form and Content is about the mysteries of dualities, the selves we all carry inside, the multiverses that we are. This collection takes its shape from the ACE Doubles format of the 1950s: turn this book one way, and read about the checkered history of those sci-fi and pulp fictions, or about the erotic poetry of Catullus and the gravelly songs of Springsteen, or about the high gods and the low-down blues, a city of the holy and of the sinful; turn this book the other way, and read about prehistoric cave artists and NASA astronauts, or about illness and health, or about the discovery of planets and the discovery of oneself inside an essay, or about soul ships and space ships, the dead and the living; or turn the book any way you want, and this book becomes an adventure of author and reader, form and content.

Goldbarth’s essays have pioneered and inspired new forms of nonfiction writing for thirty years. Robert Atwan, the series editor for The Best American Essays, praises his work by stating, “These essays are a whole new breed . . . Goldbarth has spliced strands of the old genre with a powerful new genre—and the results are miraculous.” The Adventures of Form and Content is a new, ingenious work of hilarity and humanity that reminds us of the capabilities and impossibilities of art.


Praise For The Adventures of Form and Content: Essays…

“Inventive. . . . Trying to understand our divided natures and the fusion of form and content in perfect works of art, Goldbarth covers subjects as varied as Catullus, science fiction, and the life of a professional escort. Formally, too, the book unites the ‘inescapable halves of a single being’: it’s a tete-beche, two books printed as one, with two front covers, two beginnings, and two ends.”—The New Yorker

“Albert Goldbarth’s first book of essays in a decade is about the mysteries of dualities, the selves we all carry inside, the multiverses that we are. A new, ingenious work of hilarity and humanity that reminds us of the capabilities and impossibilities of art.”—The Rumpus

“After decades of practicing his craft, [Albert Goldbarth] continues to refine it. . . . The lines become more eloquent, succinct; the voice continues to be a revelation. . . . The clicks of [Goldbarth’s] typewriter keys transport us through time, from the days of the dime store novel, the schetel, and no-budget sci-fi to the now; what was true then is true now: We must find the good in people even when we believe only their darkest tendencies will prevail.”—Spectrum Culture

“Each of Goldbarth’s essays go beyond poetry, using this relationship—form/content—as a framework through which to considerhis own experiences, experiences we immediately recognize as our own. . . . Goldbarth’s real genius is his recognition that not onlydoes form dictate content, but the two can be so intertwined it becomes impossible to distinguish between one from the other, orwhich is content and which is form. . . . There’s a perfect sort of zen-ness to Goldbarth’s work. Each sentence seems to capturethe aliveness of life.”—PopMatters

“Albert Goldbarth’s The Adventures of Form and Content imaginatively masters form and content, and is another thought provokingessay collection from the author.”—Largehearted Boy

“This essay collection is a thoughtful, poetic and remarkably human reflection on our many dualities. . . . Thanks to Goldbarth’s unlikely pairings, the ordinary becomes extraordinary; the inaccessible, accessible. . . . Reading a Goldbarth essay is like watching a fine magician at work. . . . A master certainly of both content and form, Goldbarth will assuredly have readers returning to these essays again and again, not only to delight in their material, but to search for the sleight of hand, the trick, the answer to the question: how did he do that?”—The Gazette (Cedar Rapids)

“Ever formally inventive, Goldbarth puts this book in the ACE Doubles format of the 1950s, with the two texts upside down in relation to each other as he explores the concept of multiplicity.”—Library Journal

"When it comes to adventuring with form and content, Albert Goldbarth is the master. He’s the great, bawdy, brainy, hearty master of the art."—Eula Biss

“Everyone knows that Albert Goldbarth is the master of the mix: where else but in a Goldbarth essay are you going to get the ancient Mesopotamian epic Enuma Elish mashed up against a pulpy novel? . . . Get off your screen and buy this newest and best book from the OG of the age of the essay.”—Ander Monson

“[Albert Goldbarth is] the steadfastly unpredictable master of some of the best essays in contemporary literature, experiments in force and feeling that magically bring together Goldbarth’s stratospheric erudition, kaleidoscopic imagination, and his woundingly beautiful sense of humanity.”—John D’Agata

Albert Goldbarth has twice won the National Book Critics Circle Award in Poetry. He is the author of five previous collections of essays, including Many Circles: New and Selected Essays. He lives in Wichita, Kansas.
Loading...
or
Not Currently Available for Direct Purchase