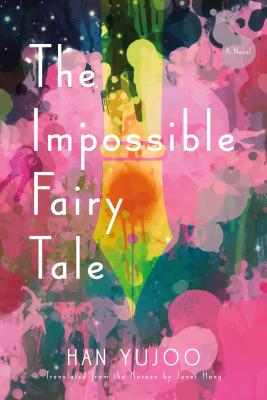 A chilling, wildly original novel from a major new voice from South Korea

The Impossible Fairy Tale is the story of two unexceptional grade-school girls. Mia is “lucky”—she is spoiled by her mother and, as she explains, her two fathers. She gloats over her exotic imported color pencils and won’t be denied a coveted sweater. Then there is the Child who, by contrast, is neither lucky nor unlucky. She makes so little impression that she seems not even to merit a name.

At school, their fellow students, whether lucky or luckless or unlucky, seem consumed by an almost murderous rage. Adults are nearly invisible, and the society the children create on their own is marked by cruelty and soul-crushing hierarchies. Then, one day, the Child sneaks into the classroom after hours and adds ominous sentences to her classmates’ notebooks. This sinister but initially inconsequential act unlocks a series of events that end in horrible violence.

But that is not the end of this eerie, unpredictable novel. A teacher, who is also this book’s author, wakes from an intense dream. When she arrives at her next class, she recognizes a student: the Child, who knows about the events of the novel’s first half, which took place years earlier. Han Yujoo’s The Impossible Fairy Tale is a fresh and terrifying exploration of the ethics of art making and of the stinging consequences of neglect.


Praise For The Impossible Fairy Tale: A Novel…

“This début novel sketches the barbaric politics of elementary school with terrifying clarity. . . . The narrative turn is both exuberantly postmodern and in dead earnest.”—The New Yorker

“Grappling with topics such as childhood, bullying, and what it means to tell a story, The Impossible Fairy Tale is an impressively unique and challenging read that is well worth your while.”—BuzzFeed

“Han Yujoo . . . casts an uncanny cloak of dreams over a South Korean childhood. . . . Janet Hong, the translator, proves adept with both the skin-prickling horror of the novel’s first half, and the second half’s dark night of the literary soul.”—The Economist

“Eerie and haunting. . . . The beauty of Yujoo’s writing and her expert word play, incredibly well translated by Hong, strengthens the sense of horror and unease that grows throughout the novel.”—The Riveter

"A powerful and primal work, a deliberately constructed story that incorporates irrationality, fear and change, and holds the reader's attention throughout."—Star Tribune (Minneapolis)

“[Han’s] work is a victory of form that packs an emotional wallop. . . . With her shifts and slights of hand, Han Yujoo makes us question the narrative constructions we lean on to understand and move through our own worlds, leaving us in a state of unknowing that is both terrifying and exhilarating.”—The Gazette (Cedar Rapids)

“The Impossible Fairy Tale is a wildly gripping page-turner, and ultimately a powerful yet unsettling read.”—Asymptote Journal

“With prose that is at once lyric and eerie, The Impossible Fairy Tale explores the beauty and horror inherent in the act of creation, reframing how we understand the dynamic between a story and its teller. . . . Yujoo’s surrealist and terrifying short novel packs an intellectual punch, offers a timely message, and suggests South Korean literature will continue to provide some of the most profound and disturbing 21st century psychological horror.”—New Orleans Review

“Bold and highly original. . . . The Impossible Fairy Tale . . . remains dreamy right till the end—with sharp and beautiful imagery involving snow, little objects like keys, a dog in a river. . . . Below the surface, in the nuances, empathy shines.”—On Art and Aesthetics

“A tour de force. . . . The world of The Impossible Fairy Tale is dreamlike, and the way that Yujoo carries the reader from scene to scene is both mind bendingly chaotic and strikingly beautiful.”—Heavy Feather Review

“This transfixing experimental novel questions where sleep ends and books begin, a concept borrowed from the works of French writer Maurice Blanchot, and the atmosphere of nightmarish dread and penetrating weirdness recalls a David Lynch film.”—Publishers Weekly

“Han pushes to the edge contextually but remains lucid in her own way; an ambitious novel for ambitious readers, and Han is a writer for those in the know to watch.”—Library Journal

“With minimal, yet meaningful, scenery and furniture—a classroom, a balcony, a green hair tie, a fountain pen, a paring knife—Yujoo weaves a haunting, yet spellbinding, tale about obsession, violence, psychosis and the immense and frightening force of an unquiet conscience.”
—Sara Baume, author of Spill Simmer Falter Wither

“Disturbing and visceral in its depiction of the savagery of childhood, yet uplifting in its reinvention of literary form. A novel of hypnotic language, page-turning suspense and mind-bending metafictional twists, The Impossible Fairy Tale is the most eerie and fearlessly experimental work I have encountered in recent years.”
—Susan Barker, author of The Incarnations

“Han Yujoo shows us what we wish we didn't have to see, what we wish we'd never seen, and what we think we see clearly but don't. She plumbs the depths of language to excavate the relationship of author to character, transforming a story about the fragility of innocence and the power of memory into an unsettling and exquisite meditation on art and cruelty. The Impossible Fairy Tale is a new kind of literary horror, as intellectual as it is transfixing.”—Sarah Gerard, author of Binary Star

“The Impossible Fairy Tale does to your head what turbulence on a plane does to your stomach. While your mind is being turned inside out, pay attention to yourself laughing before you start screaming. Listen out, too, for Maurice Blanchot, who is whispering in these pages. No doubt about it, Han Yujoo is a brave and intelligent writer.”—Lara Pawson, author of This Is The Place To Be

“Few Korean literary writers since the turn of the century rival Han Yujoo in her deep awareness of writing.”
—The List

Han Yujoo was born in Seoul in 1982. She is a translator of Michael Ondaatje and Geoff Dyer, among others, and teaches at the Seoul Institute of the Arts and Korea University’s department of creative writing. The Impossible Fairy Tale is her first novel.
Loading...
or
Not Currently Available for Direct Purchase