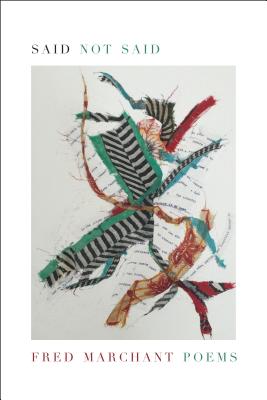 In this important and formally inventive new poetry collection, Fred Marchant brings us into realms of the intractable and the unacceptable, those places where words seem to fail us and yet are all we have. In the process he affirms lyric poetry’s central role in the contemporary moral imagination. As the National Book Award winner David Ferry writes, “The poems in this beautiful new book by Fred Marchant are autobiographical, but, as is always the case with his poems, autobiographical of how he has witnessed, with faithfully exact and pitying observation, the sufferings in the lives of other people, for example the heartbreaking series of poems about the fatal mental suffering of his sister, and the poems about other peoples, in Vietnam, in the Middle East, written about with the noble generosity of feeling that has always characterized his work, here more impressively even than before.”

Said Not Said is a poet’s taking stock of conscience, his country’s and his own, and of poetry’s capacity to speak to what matters most.


Praise For Said Not Said: Poems…

“Fred Marchant demonstrates how poetry provides a crucial outlet—and perhaps some catharsis—in response to the inequities or cruelties of life. . . . The inventiveness of his writing—which makes use of various forms and some brilliant wordplay—contributes to its power. So does Marchant’s honesty as he travels great distances, geographically and psychologically, seeking to understand the human soul.”—Washington Post

“Marchant’s wisdom is impeccably welded to his sense of how words should sound when connecting thought to experience, and how the contemporary and the ancient are inseparable. . . . [Said Not Said] is an eloquent engagement with a history we will always need to understand better, as we make collective effort to bend toward justice. Fred Marchant is a blessed, vital part of that task.”—The Rumpus

“Fred Marchant’s powerful new collection Said Not Said . . . examines the necessities of life and survival in a world ravaged by war, violence, illness and political corruption. His poetry serves as witness to the humanity present amidst sorrow and brutality, where haunting images arise through language, perhaps with the intent to carve out a space for grief and trauma.”—The Brooklyn Rail

“The poems in Fred Marchant’s autobiographical collection Said Not Said [are] generously observed and filled with wisdom.”—Largehearted Boy

“A remarkable combination of confoundedness and compassion. . . . The poems pry into the deep complications of living and some of the most painful positions the living endure—or don’t endure. . . . In each section of Said Not Said, the poet shows exquisite sensitivity to the pain of others, reaching from far away to deep down for subject matter in this fifth collection. . . . Like the various and reputable artists alluded to in this text—from Ovid to O’Keefe, Petrarch to Prado, Hesiod to Whitman—Marchant carves aversion of the truth, artful poems exploring the marrow of mortality with a keen and compassionate eye.”—Pleiades

“Vivid scraps of memory, patterned by Marchant, cohere and weave through this elegant collection. . . . What’s said—and what is not—co-exist vibrantly in this book.”—The Los Angeles Review

"[Marchant] works with a certain unassuming grace and authenticity. . . . Said Not Said is a beautiful exploration of our most vulnerable human experiences and a rare beacon for those who have lived through loss and mourning. . . . All in all, the words work wonders."—The Ocean State Review

“Read Said Not Said not only for the fruits of these meditations but the experiments with form that Marchant uses as vessels for them.”—Image Journal Newsletter

“[A] sublime and subtle collection. . . . Similar in approach to Larry Levis and David St. John, Marchant is at his finest when he blends everyday reflection and curious erudition, both of which he delivers in equal measure.”—Booklist

“Wisdom is singularly sublime in Marchant’s gift. Just when we think the rocks cannot be made to tremble, there comes a book that takes the dangers of war alongside a fishbone caught in the throat to show us how the variable silences of love and fear take us to the interior of hope. Said Not Said is the sage’s elegance, a direct pointing to the truth.”—Afaa Michael Weaver

“The poems in this beautiful new book by Fred Marchant are autobiographical, but, as is always the case with his poems, autobiographical of how he has witnessed, with faithfully exact and pitying observation, the sufferings in the lives of other people, for example the heartbreaking series of poems about the fatal mental suffering of his sister, and the poems about other peoples, in Vietnam, in the Middle East, written about with the noble generosity of feeling that has always characterized his work, here more impressively even than before.”—David Ferry

“Said Not Said is a disorienting, reorienting journey, one that both is and is not contained in language. Its poems journey through ‘sacred roads,’ war’s aftermath in Vietnam, news of Benghazi, the flight of refugees, and far more. They journey into the deeply untranslatable and unaccountable nature of violence and suffering: children ‘mysteriously stop breathing,’ and we have few good guides for ‘how to think about the dead.’ This collection is such a guide, enlarging our awareness of time and place, of the scope of lives lost, of ‘glacial stones migrating under the earth,’ of ‘what words alone cannot say.’ Fred Marchant knows how to find rare and needed openness and to ‘look hard into’ its possibilities. I love the unflagging generosity of these poems, a generosity that carries us through every heartbreak. Marchant continually offer us a ‘portion of happiness’ while keeping for himself his ‘share of the sorrow.’”—Mary Szybist

Fred Marchant is the author of four previous poetry collections, including The Looking House and Full Moon Boat, and he recently edited Another World Instead: The Early Poems of William Stafford. He lives in the Boston area.
Loading...
or
Not Currently Available for Direct Purchase