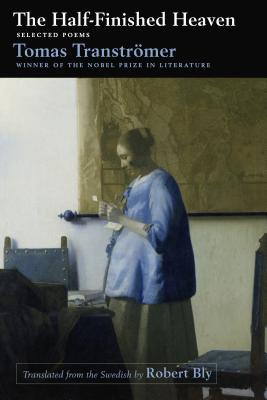 From the Winner of the 2011 Nobel Prize in Literature

An expanded edition by the Nobel laureate Tomas Tranströmer, translated by the award-winning poet Robert Bly

Every person is a half-open door
leading to a room for everyone.

The endless field under us.

Water glitters between the trees.

The lake is a window into the earth.

—from “The Half-Finished Heaven”

Tomas Tranströmer’s celebrated career earned him a place among the twentieth century’s essential global voices. Translated into more than fifty languages, his poetry draws readers to its power and resonance, its shaping of landscapes both outer and interior, stark and yet alive to the luminous. In 2011, Tranströmer was awarded the Nobel Prize in Literature “because, through his condensed, translucent images, he gives us fresh access to reality.”

The National Book Award–winning poet and renowned translator Robert Bly first introduced American readers to Tranströmer’s poetry in his seminal English translations, all of which are collected here for the first time in this expanded edition. With an updated introduction and fourteen additional poems, The Half-Finished Heaven presents the best of Tranströmer’s poetry in one indispensable volume.

“The poems of Tomas Tranströmer are points of entry 'upward into / the depths' of an imagination, a spirit that is regeneratively inventive, capacious, unillusioned, undaunted, admirable . . . This extraordinary collection of work by one of Sweden's greatest contemporary poets presents a rich sampling of verse published during the past five decades.”—The New York Times Book Review

“The Half-Finished Heaven provides a wonderful respite for world-weary readers as well as a lovely introduction to the work of Nobel Prize winning poet Tomas Tranströmer. . . . Translator Robert Bly . . . masterfully renders Tranströmer’s work. . . . Tranströmer’s perspective is refreshing, the verbal equivalent of a brisk wind or a cold stream on a hot day.”—Washington Post

"In this new updated version of his selected poems we find more than a dozen new translations from Tranströmer's strange and blue-ish work. To read these versions in 2017 is like seeing the after-image of a great work. They are eerie and beautiful and a little bit sad, like so much of Tranströmer's poetry. Heaven it seems will always be half-finished."—John Freeman, Literary Hub

Tomas Tranströmer (1933-2015) received the Nobel Prize in Literature in 2011. His books of poetry, which have been translated into sixty languages, include The Deleted World and The Half-Finished Heaven, and he received numerous international honors during his lifetime. Tranströmer, a trained Swedish psychologist, worked for years in state institutions with juveniles and the disabled, and his work was often praised for the inventive ways in which it examined the mind. When he was awarded the Nobel Prize, the Swedish Academy stated that "through his condensed, translucent images, he gave us fresh access to reality."

Robert Bly (1926-2021) was an American poet, author, activist, translator, and leader of the mythopoetic men’s movement. His book Iron John: A Book About Men was a key text of the movement, and spent 62 weeks on the New York Times bestseller list. He won the 1968 National Book Award for poetry for his book The Light Around the Body, and was named Minnesota’s first poet laureate in 2008. He also received the Maurice English Poetry Award, and the Poetry Society of America’s Robert Frost Medal for lifetime achievement.

Bly’s other poetic works include More Than True: The Wisdom of Fairy Tales, Loving a Woman in Two Worlds, and Stealing Sugar from the Castle: Selected and New Poems, 1950-2013.