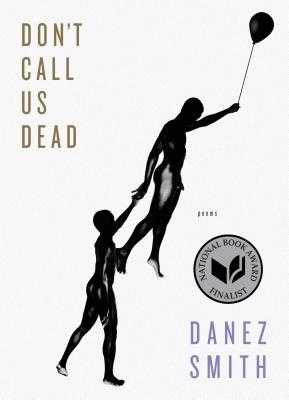 “[Smith's] poems are enriched to the point of volatility, but they pay out, often, in sudden joy.”—The New Yorker

Award-winning poet Danez Smith is a groundbreaking force, celebrated for deft lyrics, urgent subjects, and performative power. Don’t Call Us Dead opens with a heartrending sequence that imagines an afterlife for black men shot by police, a place where suspicion, violence, and grief are forgotten and replaced with the safety, love, and longevity they deserved here on earth. Smith turns then to desire, mortality—the dangers experienced in skin and body and blood—and a diagnosis of HIV positive. “Some of us are killed / in pieces,” Smith writes, “some of us all at once.” Don’t Call Us Dead is an astonishing and ambitious collection, one that confronts, praises, and rebukes America—“Dear White America”—where every day is too often a funeral and not often enough a miracle.

“These poems can’t make history vanish, but they can contend against it with the force of a restorative imagination. Smith’s work is about that imagination—its role in repairing and sustaining communities, and in making the world more bearable. . . . Their poems are enriched to the point of volatility, but they pay out, often, in sudden joy. . . . But they also know the magic trick of making writing on the page operate like the most ecstatic speech.”—The New Yorker

“[A] stunning collection. . . . These pieces pulse with the rhythms and assertiveness one expects from poetry slams.”—The Washington Post

“Searing. . . . Smith’s capacity for compassionate invention is epic. . . . Smith races across lexicons and spectra, pushing even the boundaries of typography in wrestling with the dreadful fact that the black male body is imperiled from both within and without.”—Tracy K. Smith, O, The Oprah Magazine

“Don’t Call Us Dead is poet Danez Smith’s ferocious second collection. With humanity and heart, Smith contemplates the assaults on a black, male body in America — police brutality, violence, and AIDS, and the resulting culture of danger, suspicion, grief, psychological pain, and resistance.”—BuzzFeed

“Smith prophesies an end from which a new beginning might spring. Throughout Don’t Call Us Dead, hope appears as a form of resistance and rebirth.”—The Guardian (UK)

“Exceptional. . . . There is pain here but there is so much joy, so much fierce resistance to anything that dares to temper the stories being told here.”—Roxane Gay, Vulture

“Smith’s work is astonishing, its power is a seething one. . . . An essential part of every American’s reading experience.”—Nylon

“Danez Smith’s astonishing second collection, a finalist for this year’s National Book Award, is a testament to the collective power of the queer black imagination and to Smith’s individual talent. He is one of the most original and powerful poets working today.”—Star Tribune (Minneapolis)

“In between rich odes to sexual awakening and love, Smith’s poetry reverberates with an ever-present awareness of the endless fear and latent hurt that accompanies the daily existence of black men in the United States. . . . These are poems you want to wrap your arms around and keep safe.”—Vox

“Don’t Call Us Dead . . . may be the greatest book—not just of poetry, but of any writing, period—I’ve read all decade.”—Porochista Khakpour, Bookforum

“Smith activates a spectrum of emotions in material that could justifiably remain tragic, bringing pathos and several senses of humor.”—The Nation

“These poems are a reminder that there is always at least as much joy as there is violence.”—Rookie

“Elegy meets celebration of the black male body on every page. . . . Smith can’t help but be breathtaking in style and substance.”—Virginia Quarterly Review

“Aching and elegiac, these poems bless our world in all its ruin, beg it to be otherwise, and begin the bloody work of writing it anew.”—Literary Hub

“Danez Smith is a meteorite of the poetry world, blazing new territory with each new book.”—MPR News

“Don’t Call Us Dead is an historical commentary, a scientific document, a personal narrative, and a formal poetics. . . . Smith uses every tool of craft at a poet’s disposal to deliver powerful, urgent, deliberate, crucial poems. Don’t miss this book.”—The Rumpus

“Smith’s book is like poetic rapture. . . . Read Don’t Call Us Dead start to finish and if your breath takes a beat, that’s the point: Smith is here to call us out, wake us up, tear us down to what is raw.”—The Millions

“The result is bittersweet, but the sweetness is real, even when it’s grounded in imagination—partly because that imagination is so grounded in the reality it wants to refuse, but just as much because Smith, in fantasy and in grief, commits to giving pleasure. These poems are a form of entertainment—something far more profound than we tend to admit. Entertainment is more than mere escapism; it’s a form of generosity—a way to knit up the raveled time and materials of lives made ragged. And Smith, at their best, entertains unusually well.”—Kenyon Review

“The poet has always been a prophet leading cultural change to the good, and Danez Smith makes a revival of death into song in Don’t Call Us Dead. . . . Danez Smith is making a high niche in evolution, by sourcing his life into indelible art.”—Washington Independent Review of Books

“Smith has created in this book a universe of boys—black boys, brown boys, sexualized ‘bois,’ but for every struggling, injured or dead boy, there is a heartbroken mother, a grieving grandmother, a fractured circle of friends—a community joined by loss. Smith has managed to leaven this pathos with praise, humor, and the hope of redemption.”—The Hudson Review

“Danez Smith has become one of a generation’s most noticed poets, and for good reason: at once a stunning performer and a tersely effective arranger of words on the page, Smith can address the Black Lives Matter movement, the erasure of black humanity by malign police, and then pivot to vivid, sexy, or scary records from a complex queer sexuality.”—Poets.org

“It’s been a while since I’ve read a book of poems where I felt that the poems had to be written, that everything was at stake in the writing of them—that’s how I feel about Danez Smith’s Don’t Call Us Dead, in terms of what the poems address, variously queerness, life on both sides of the divide between HIV- and HIV+, life in the wake of having lost so many friends to the seeming dailiness of police murdering black men in particular, black people more generally. Far, though, from succumbing to despair, Smith makes of joy—of the expression of joy—both a tool for survival and a form of resistance.”—Carl Phillips, Poetry Foundation

“[Don’t Call Us Dead] is all the things poetry ought to be but rarely grasps—heartbreaking, funny, sorrowful, surprising.”—Mpls.St.Paul Magazine

“Not content to merely allow us to play witness to the horrors of oppression, Smith’s poems pull us into it; they brim with blood, violence, aches and broken bodies. But there is humor, too, and hope, and it’s this hope that elevates the book to its crucial contemporary importance.”—BookPage

“These poems decenter through love, erasing margins and reconfiguring the world as a space in which the marginalized body is worthy, the dismissed spirit is honored. They imagine lovingly. They critique lovingly. They mourn and celebrate and insist lovingly.”—Fight and Fiddle

“Don’t Call Us Dead rattles the core of the heart and consciousness for a new understanding of self and its singular and collective orientation in the world. . . . This volume is a testament of a lively and courageous human facing the gun, so to speak, interrogating who flexes power and who is on the other end. Smith lifts the fallen body/bodies up to the light, probes the cosmos for a fierce justice, sees in their brothers’ redemption, objects to random forces of violence, of people gone unhonored, resisting oppression.”—Empty Mirror

“In this remarkable second collection from Kate Tufts/Lambda Award winner Smith, the content as well as the writing is transcendent.”—Library Journal, starred review

“Part indelible elegy, part glorious love song to ‘those brown folks who make / up the nation of my heart,’ Smith’s powerhouse collection is lush with luminous imagery, slick rhythms, and shrewd nods to Lucille Clifton, Beyoncé, and Diana Ross. Incandescent, indispensable, and, yes, nothing short of a miracle.”—Booklist, starred review

“This book is poetry as fierce fire. There is such intelligence and fervor in these poems about black men and their imperiled bodies, gay men and their impassioned bodies, what it means to be HIV positive, and so much more. Every poem impressed me, and the level of craft here is impeccable. Loved this one.”—Roxane Gay

“In an America that conspires against black, brown, queer, and trans bodies, Danez Smith writes poems of insistence and resistance; they anticipate a better world for all of us ‘where everything is sanctuary & nothing is a gun.’”—D. A. Powell

“Danez Smith is an original. . . . If you have ever lost faith, if you want to believe in life, then you must read this book—it will humble and uplift you, leave you understanding that in the face of it all, there is only awe.”—Chris Abani

Danez Smith is the author of [insert] boy, winner of the Lambda Literary Award for Gay Poetry and the Kate Tufts Discovery Award. Smith has received fellowships from the McKnight Foundation and the Poetry Foundation, and lives in Minneapolis.
Loading...
or support indie stores by buying on