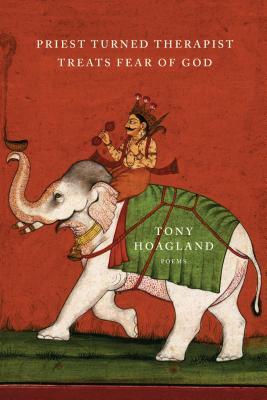 “Hoagland’s verse is consistently, and crucially, bloodied by a sense of menace and by straight talk.” —The New York Times

My heroes are the ones who don’t say much.
They don’t hug people they just met.
They don’t play louder when confused.
They use plain language even when they listen.

Wisdom doesn’t come to every Californian.
Chances are I too
will die with difficulty in the dark.

If you want to see a lost civilizaton,
why not look in the mirror?
If you want to talk about love, why not begin
with those marigolds you forgot to water?

Tony Hoagland’s poems interrogate human nature and contemporary culture with an intimate and wild urgency, located somewhere between outrage, stand-up comedy, and grief. His new poems are no less observant of the human and the worldly, no less skeptical, and no less amusing, but they have drifted toward the greater depths of open emotion. Over six collections, Hoagland’s poetry has gotten bigger, more tender, and more encompassing. The poems in Priest Turned Therapist Treats Fear of God turn his clear-eyed vision toward the hidden spaces—and spaciousness—in the human predicament.

“The writing is classic Hoagland: accessible and conversational, sometimes humorous, as he scrutinizes everything from a book he’s reading to mortality and the emotions that arise when he thinks of the music of Leonard Cohen while sitting in a hospital waiting room. . . . The work raises important questions ‘about the hazards of playing at innocence,’ why our culture can’t seem to make progress and why no one seems to recognize the impending environmental crisis.”—The Washington Post

“Tony Hoagland . . . takes us on a journey with his skill and capacities. He’s a major talent.”—Washington Independent Review of Books

“Never sentimental, often fond, and always accurate, [Hoagland’s] lines cut through to the essence of experience. Yet they are leavened by tenderness and longing, a wry acceptance of the human condition.”—Zyzzyva

“Hoagland’s poems are ripe with emotion. Some are sharpened to such a fine point that the reader won’t feel the dagger of humor with which they’ve been stabbed. . . . This is the poetry of resistance, resistance as unstoppable force.”—Signature Reads

“Priest Turned Therapist is an honest, accurate, and beautiful appraisal of this thing we call life.”—The Coil

“Throughout, Hoagland’s work is refreshingly accessible without compromising sophistication or a complexity of thought.”—Publishers Weekly, starred review

“Hoagland brings both humor and grief to a stirring poetic discourse. The poems reveal a remarkable mix of simple diction and documentary detail linked together with dark humor and satire. . . . Hoagland imbues smooth narrative with irony and surreal humor to deliver an especially rewarding book.”—Library Journal, starred review

“Whether expansive or brief as aphorism. . . . the affect Hoagland conveys is often breathtaking.”—Booklist

Tony Hoagland is the author of five previous poetry collections, including Application for Release from the Dream and What Narcissism Means to Me, a finalist for the National Book Critics Circle Award. He lives in Santa Fe, New Mexico.
Loading...
or
Not Currently Available for Direct Purchase