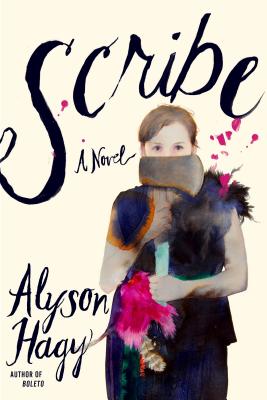 “I’m sure many book lovers among us would bemoan the lost art of letter-writing if given the chance. Alyson Hagy’s short novel Scribe returns us to a time when the written word was sacred—in an alternate timeline, to be exact. After a civil war and an epidemic have ravaged the Appalachian region, one woman has become famous for her almost mystical ability to transcribe thoughts and emotions onto paper. Part historical fiction and part post-apocalyptic saga, Scribe finds the perfect alchemy between Cold Mountain and The Leftovers.”
— Sarah Crossland, New Dominion Bookshop, Charlottesville, VA
View the List

“Scribe is a novel about dystopian Appalachia following the Civil War, a place ravaged by sickness and divvied up by the brute strength of men and their ability to defeat any invaders. If that doesn’t pique your interest, its main character is a complicated woman with a highly valued skill: the ability to write. In the wake of war and widespread fever, she sustains herself by creating paper and ink and writing the most heartbreakingly poetic letters to help others declare their triumphs and sins. After getting a special request from an unusual passerby, she finds herself in danger and must flee the once-beautiful but now brutal farmland she’s always called home. Scribe is as deeply imaginative as it is viscerally emotional, and Alyson Hagy’s ability to temper darkness with light makes it a spellbinding novel.”
— Morgan McComb, Raven Book Store, Lawrence, KS
View the List

A haunting, evocative tale about the power of storytelling

A brutal civil war has ravaged the country, and contagious fevers have decimated the population. Abandoned farmhouses litter the isolated mountain valleys and shady hollows. The economy has been reduced to barter and trade.

In this craggy, unwelcoming world, the central character of Scribe ekes out a lonely living on the family farmstead where she was raised and where her sister met an untimely end. She lets a migrant group known as the Uninvited set up temporary camps on her land, and maintains an uneasy peace with her cagey neighbors and the local enforcer. She has learned how to make paper and ink, and she has become known for her letter-writing skills, which she exchanges for tobacco, firewood, and other scarce resources. An unusual request for a letter from a man with hidden motivations unleashes the ghosts of her troubled past and sets off a series of increasingly calamitous events that culminate in a harrowing journey to a crossroads.

Drawing on traditional folktales and the history and culture of Appalachia, Alyson Hagy has crafted a gripping, swiftly plotted novel that touches on pressing issues of our time—migration, pandemic disease, the rise of authoritarianism—and makes a compelling case for the power of stories to both show us the world and transform it.


Praise For Scribe: A Novel…

“Scribe, which begins with the baying of hounds and ends with silence, reminds us on every page that humans remain the storytelling animal, and that therein might lie our salvation. . . . In this brave new world, a woman with a pen may prove mightier than a man with a sword.”—The New York Times Book Review

“It’s a hungry book—one where every sentence seems to imply a second that it never offers; where every page and every paragraph offers the ghost of a feast, but never lets you eat.”—NPR.org

“Fans of Fiona Mozley’s Elmet will revel in this genre-busting feminist folktale of a novel, which is as rooted in its own particular, peculiar time as it is relevant to the concerns of 2018.”—Vanity Fair

“Though setting, identity and motivations are shrouded in Blue Ridge mist, Hagy’s language is intense and crisp. . . . Hagy does a splendid job of intertwining the strange threads in her novel, and readers with a taste for magical doings will not be disappointed.”—Star Tribune (Minneapolis)

“Rooted in [Hagy’s] Appalachia and yet otherworldly, bound by symbols and held just slightly out of time, Scribe is a storyteller’s book about the radical power and responsibility of words.”—The Millions

“An original addition to the post-apocalyptic genre, Scribe reaffirms the power of the pen and the surviving quality of the human spirit.”—The Arkansas International

“A slim and affecting powerhouse. . . . Hagy is a careful writer; each sentence feels as solid and sturdy as stone. . . . Timely and timeless; a deft novel about the consequences and resilience of storytelling.”—Kirkus Reviews, starred review

“Hagy probes the weight of responsibility and the desperation of survival in a deteriorated society in this evocative, opaque tale. . . . The vagueness of setting, supernatural elements, and only partially revealed histories amp up the eeriness of this disquieting novel.”—Publishers Weekly

“More than a novel. . . . [Scribe] defies the hush of a dying world with every breathtaking sentence.”—Hérnan Díaz

Alyson Hagy was raised on a farm in the Blue Ridge Mountains of Virginia. She is the author of seven previous works of fiction, most recently Boleto. She lives in Laramie, Wyoming.
Loading...
or
Not Currently Available for Direct Purchase