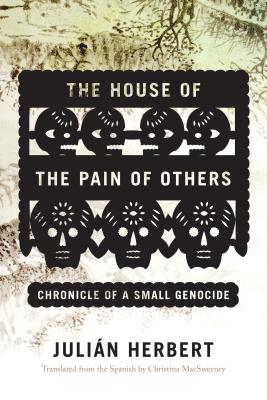 The House of the Pain of Others

Chronicle of a Small Genocide

Early in the twentieth century, amid the myths of progress and modernity that underpinned Mexico’s ruling party, some three hundred Chinese immigrants—close to half of the Cantonese residents of the newly founded city of Torreón—were massacred over the course of three days. It is considered the largest slaughter of Chinese people in the history of the Americas, but more than a century later, the facts continue to be elusive, mistaken, and repressed.

“And what do you know about the Chinese people who were killed here?” Julián Herbert asks anyone who will listen. An exorcism of persistent and discomfiting ghosts, The House of the Pain of Others attempts a reckoning with the 1911 massacre. Looping, digressive, and cinematic, Herbert blends reportage, personal reflection, essay, and academic research to portray the historical context as well as the lives of the perpetrators and victims of the “small genocide.” This brilliant historical excavation echoes profoundly in an age redolent with violence and xenophobia.


Praise For The House of the Pain of Others: Chronicle of a Small Genocide…

“The great strength of Herbert’s book, written with such shame and fury, is that it is not framed as epitaph but as dispatch from a live crime scene, attentive to the silences, the still seething resentments, relinquishing nothing to history.”—The New York Times

“A stunning account of the ways in which xenophobia and ignorance fuel violence. . . . With poetic reportage, Herbert conjures the reality of blood in the soil everywhere and the need for vigilance against nationalism.”—Literary Hub

“[The House of the Pain of Others] is both vivid and enthusiastically researched, examining each piece of available evidence to establish what must have happened at every stage and how it was obscured, then and later.”—Harper’s

“If The House of the Pain of Others is a work of history, then, it’s a self-aware one, more crónica than objective report. The narrative is filtered through Herbert’s distinct sensibility, one that reveals how stories of the past are actually written—subjectively, provisionally, influenced by the sheer randomness of experience.”—Bookforum

“Herbert understands rhetoric’s power and uses it to expose a century-old atrocity. . . . A century passes. The world turns. Herbert reaches out with history and art, beseeching us to not let these crimes go unheeded.”—Paste

“The House of the Pain of Others is partially about how the past haunts the present, especially if the root issues go unaddressed. The book is about Mexico, and Torreón, but its lessons are not limited to those localities. Herbert claims that ‘this is not the story you were expecting,’ but in many ways it is achingly familiar.”—Shelf Awareness

“The strengths of Herbert’s writing are patent throughout: his vast, comprehensive research; his often elegant phrases and sentences . . . ; his empathy; and his determination to be accurate and fair. . . . A grim, complex and admonitory account of a deeply racist episode that many would rather forget—or ignore.”—Kirkus Reviews

“The House of the Pain of Others is a meticulous exploration into the way we learn to hate—and the oblivion we co-create to mask our complicity and shame.”—Anna Badkhen

Julián Herbert was born in Acapulco in 1971. He is a writer, musician, and teacher, and is the author of Tomb Song as well as several volumes of poetry and two story collections. He lives in Saltillo, Mexico.

Christina MacSweeney was awarded the 2016 Valle Inclán Translation Prize for her translations of Valeria Luiselli’s The Story of My Teeth. Her translation of Daniel Saldaña París’s novel Among Strange Victims was shortlisted for the 2017 Best Translated Book Award.