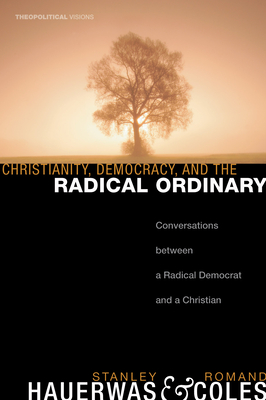 Christianity, Democracy, and the Radical Ordinary

Conversations Between a Radical Democrat and a Christian (Theopolitical Visions)

Description: In Christianity, Democracy, and the Radical Ordinary, theologian Stanley Hauerwas and political theorist Romand Coles reflect about possibilities and practices of radical democracy and radical ecclesia that take form in the textures of relational care for the radical ordinary. They seek to shift political and theological imaginations beyond the limits of contemporary political formations (such as global capitalism, the mega-state, and empire), which they argue are based upon both the denial and production of death. Hauerwas and Coles call us to a revolutionary politics of ""wild patience"" that seeks transformation through attentive practices of listening, relationship-building, and a careful tending to places, common goods, and diverse possibilities for flourishing. Both authors translate back and forth across--as well as dwell in the tensions between--the languages of radical democracy and of trial, cross, and resurrection. Engaging each other through a variety of genres--from essays, to letters, to cowriting and dialogue--Hauerwas and Coles seek to enact a politics that is evangelical in its radical receptivity across strange differences and that cultivates power in relation to vulnerability. The authors argue that there is a strong relation between hope and imagination, as well as between imagination and the encounter with and memory of those who have lived with receptive generosity toward the radical ordinary. Hence, throughout this book they think extensively in relation to specific lives and practices: from Ella Baker and the early Student Nonviolent Coordinating Committee organizing efforts for beloved community and civil rights, to L'Arche communities founded by Jean Vanier, to contemporary faith-based radical democratic organizing efforts in dozens of cities by the Industrial Areas Foundation. Pushing and pulling each other into new and insightful journeys of political imagination, this conversation between a radical Christian and a radical democratic trickster spurs us toward a politics that acknowledges, tends to, and enacts the powers of the radical ordinary.