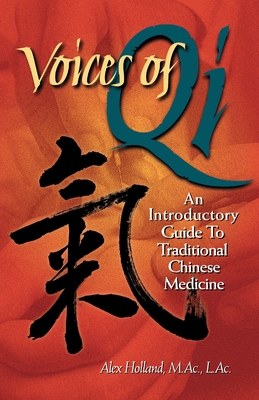 We are in the middle of a cultural revolution in the health care industry. Nearly eight thousand people practice Traditional Chinese Medicine in the US and thirty-five states currently offer some form of legal status for its practice. Many people are seeking alternatives to the Western, medical approach to health care. To these seekers, Voices of Qi is an invaluable aid in exploring what Traditional Chinese Medicine has to offer. Alex Holland has done an admirable job of presenting the basic tenets and practices to this ancient tradition in a clear, concise and accessible manner.

Alex Holland is an acupuncturist, teacher, musician and composer. He was one of the first graduates in 1985 from the Northwest Institute of Acupuncture and Oriental Medicine in Seattle and has been instrumental in the Institute's continued growth and development. He was the Institute's Academic Dean from 1992 to 1996 and former Chair of the Board of Directors. He spent time in Chongqing, China in 1985, working at the Chongqing Research Institute of Traditional Chinese Medicine. He currently lives in a woodland hideaway with his wife, Linda, and three cats in the Victorian seaport of Port Townsend, WA, where they operate Peninsula Acupuncture Clinic. He divides his time between practicing acupuncture, music, teaching and exploring healing through energy medicine and expanded conciousness.
Loading...
or
Not Currently Available for Direct Purchase