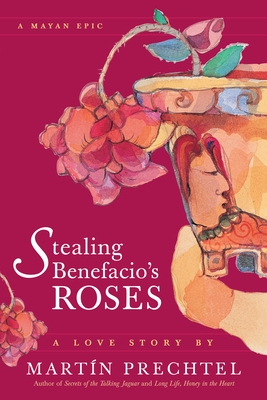 Following the acclaimed Secrets of The Talking Jaguar and Long Life, Honey in the Heart, this is an expansive, lyrical novel in the tradition of indigenous oral storytelling. Based on the author's many years of living in a Guatemalan village, Stealing Benefacio's Roses interweaves dramatic recountings of village life and the political horrors of civil war with lyric retellings of sacred Mayan myths. The story shifts expertly from timeless, with archetypal characters like Raggedy Boy and the goddess known as the Water-Skirted Beauty, to timely in the book's striking first-person narrative set in the 1980s. Prechtel shows how ancient myths can become a part of life for everyone and help nurture spiritual survival in the modern world. Though it comes third in sequence with the author's other two books, Stealing Benefacio's Roses also stands on its own as a classic work of spiritual seeking and adventure.

A master of eloquence and innovative language, Martín Prechtel is a leading thinker, writer, and teacher whose work, both written and oral, brings to life the pre-modern subtleties of any living language. His life, well documented in his books, has taken him from the Pueblo Indian reservation in New Mexico, where he grew up, to the Guatemalan village of Santiago Atitlan, where he was the student and eventual successor of a powerful shaman. Eventually Prechtel became a principal member of the village body of spiritual leaders, responsible for introducing the young people to the meanings of their ancient stories and guiding them through their long rituals of initiation. Today Martín Prechtel lives once again in his native New Mexico and is active as a writer, teacher, speaker, musician, and healer. Using ceremony, language, story, and healing he helps people in many lands reconnect with a sense of place, a sense of the daily sacred, and their search for the Indigenous Soul.

"Once in a decade you read a book that, for a time, renders all other books irrelevant, trivial or extraneous—Stealing Benefacio's Roses is one of these peak moments in recent literature."—Richard Grossinger
or support indie stores by buying on
Copyright © 2020 American Booksellers Association