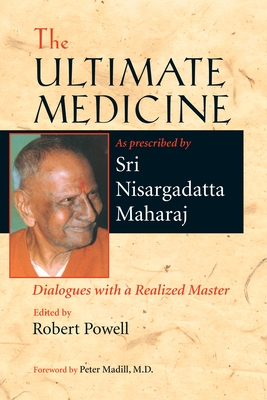 Dialogues with a Realized Master

The Ultimate Medicine is not for those who like their spirituality watered down, but for serious students searching for awareness. Sri Nisargadatta Maharaj (1897-1981) lived and taught in a small apartment in the slums of Bombay. A realized master of the Tantric Nath lineage, he supported himself and his family by selling cheap goods in a small booth on the streets outside his tenement for many years. His life exemplified the concept of absolute nonduality of being. In this volume, Maharaj shares the highest truth of nonduality in his own unique way. His teaching style is abrupt, provocative, and immensely profound, cutting to the core and wasting little effort on inessentials. His terse but potent sayings are known for their ability to trigger shifts in consciousness, just by hearing or reading them."The point is that man freed from his fetters is morality personified. Such a man therefore does not need any moralistic injunctions in order to live righteously. Free a man from his bondage and thereafter everything else will take care of itself. On the other hand, man in his unredeemed state cannot possibly live morally, no matter what moral teaching he is given. It is an intrinsic impossibility, for his very foundation is immorality. That is, he lives a lie, a basic contradiction: functioning in all his relationships as the separate entity he believes himself to be, whereas in reality no such separation exists. His every action therefore does violence to other 'selves' and other 'creatures,' which are only manifestations of the unitary consciousness. So Society had to invent some restraints in order to protect itself from its own worst excesses and thereby maintain some kind of status quo. The resulting arbitrary rules, which vary with place and time and therefore are purely relative, it calls 'morality,' and by upholding this man-invented 'idea' as the highest good–oftentimes sanctioned by religious 'revelation' and scriptures–society has provided man with one more excuse to disregard the quest for liberation or relegate it to a fairly low priority in his scheme of things."

Robert Powell was born in Amsterdam, the Netherlands, in 1918. After obtaining his doctorate in chemistry from London University, he pursued a career first as an industrial chemist and later as a science writer and editor in Britain and the United States. Robert Powell's personal exploration of spirituality began in the 1960s, and his quest for self-discovery led him to Zen and a number of spiritual masters including J. Krishnamurti and Ramana Maharshi. His own spiritual awakening coincided with his discovery of the teachings of Nisargadatta Maharaj. He is the editor of a Nisargadatta trilogy, and the author of a number of books on what he describes as "human consciousness transformation." Powell now lives a busy life in La Jolla, California, with his loving wife, Gina.
Loading...
or
Not Currently Available for Direct Purchase