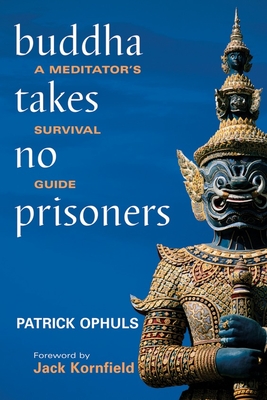 This insightful, easy-to-read handbook offers a non-traditional perspective on meditation. Written primarily for American insight meditation students, it delivers the Buddha's essential teachings clearly, straightforwardly, and without spiritual jargon, and helps make sense of practices often laden with traditional terminology. Practical explanations of the meditation process, its benefits and applicability to daily life, and warmly humorous advice and encouragement give new practitioners the help necessary to continue practicing meditation on a regular basis.

Patrick Ophuls graduated in 1955 from Princeton University with a degree in Near Eastern area studies and obtained a PhD from Yale in political science in 1973. He joined the U.S. Foreign Service in 1959, was a political analyst on the Afghanistan desk at the State Department, and was also posted to American embassies in Abidjan, Ivory Coast, and Tokyo, Japan, as a personal aide to two ambassadors. Leaving the Foreign Service in 1967, he became a professor of political science at Northwestern University. Patrick Ophuls has practiced insight meditation intensively for over 30 years. He began sitting with the Thai teacher Dhiravamsa in 1974, graduating from his teacher training program in 1977 and going on to assist him during several retreats in 1978. He began studying with Insight Meditation Society founders Jack Kornfield, Joseph Goldstein and Sharon Salzberg in the late seventies, an association that continues to this day.Jack Kornfield was trained as a Buddhist monk in Thailand, Burma and India. Kornfield has become one of the key teachers to introduce Theravada Buddhist practice to the West. For many years his work has focused on integrating and bringing alive the great Eastern spiritual teachings in an accessible way for Western students and Western society. His books, audio tapes, and teachings have acted as an inspiration for countless Western students of Buddhism. His books include the bestselling A Path With Heart and After the Ecstasy, the Laundry. Jack Kornfield holds a Ph.D. in clinical psychology. He is also a founding teacher of the Spirit Rock Center in Woodacre, California, where he currently lives and teaches.

Praise For Buddha Takes No Prisoners: A Meditator's Survival Guide…

"A wise, clear, and playfully irreverent account of a meditator’s journey. Patrick Ophuls speaks from experience as he points out the depth of the teachings and the seductions along the way."
—Joseph Goldstein, author of One Dharma: The Emerging Western Buddhism

"A good introduction for the beginner and a fresh perspective for the experienced practitioner. Alternately makes us laugh at ourselves and reminds us of the poignancy of the teachings."
—Sharon Salzberg, author of A Heart as Wide as the World

"Ophuls gives us a no-nonsense, commonsense tour of mindfulness-based meditation practice, pointing out contradictions and pitfalls, and laughing at our pretentions. ... This book will help you swim to the other shore."
—Wes Nisker, editor in chief, Inquiring Mind

“Patrick Ophuls’ style is straight-forward and engaging. He doesn’t cut any corners, and he doesn’t fluff up his writing… [Buddha Takes No Prisoners is] approachable yet elevating… The book is like a FAQ for your Buddhist practice. I definitely recommend it.”
—Home Brew Dharma

“Ophuls has done us all a favor by reframing meditation and the essentials of Buddhism in imaginative terms that are both appealing and edifying. Meditation, he says, is like spring-cleaning your heart and mind.”
—Spirituality & Practice
or
Not Currently Available for Direct Purchase
Copyright © 2020 American Booksellers Association