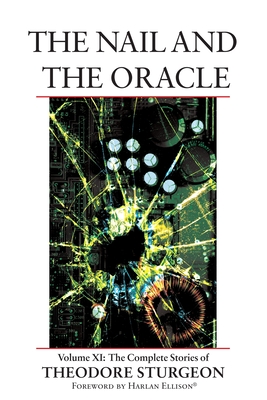 The Nail and the Oracle

This book contains ten major stories by the master of science fiction, fantasy, and horror written during the 1960s. The controversial “If All Men We re Brothers, Would You Let One Marry Your Sister?” shows the author’s technique of “ask the next question” used in a way that shatters social conventions. “When You Care, When You Love” offers a prescient vision of the marriage of deep obsessive love and genetic manipulation, written long before actual cloning techniques existed. “Runesmith” constitutes a rare example of Sturgeon collaborating with a legendary colleague, Harlan Ellison. Included also are two other rarities: two detective stories and a Western that showcase Sturgeon’s knack for characterization and action outside his usual genre. “Take Care of Joey” has been read as an allusion to the complex personal relationship between Sturgeon and Ellison, while “It Was Nothing, Really!” hilariously skewers the mores of the military-industrial complex. As always, these stories demonstrate not only Sturgeon’s brilliant wordplay but also his timeliness, with “Brown-shoes” and “The Nail and the Oracle” standing out as powerful commentaries on the use and abuse of power that might have been written yesterday.

Praise For The Nail and the Oracle: Volume XI: The Complete Stories of Theodore Sturgeon…

“The late Ted Sturgeon was one of the greats. If you believe what Harlan Ellison says in his foreword to The Nail and the Oracle, Volume XI: The Complete Stories of Theodore Sturgeon, he may even have been the greatest SF writer ever. Sure, he was quirky, but he could write like an angel and he well deserves the adulation directed toward his ghost since his death in 1985. The present volume collects a dozen of his works from 1957 to 1970, ‘his prime story-writing years.’ One of the stars of the collection is the famous ‘If All Men Were Brothers, Would You Let One Marry Your Sister?’ Another is ‘Runesmith,’ cowritten with Harlan. For the rest, order a copy. Sturgeon, as long as he’s been gone, is not a writer one regrets reading.”
—Analog Science Fiction and Fact

Theodore Sturgeon was one of science fiction’s most acclaimed and influential writers. In addition to hundreds of stories, he wrote novels, scripts for Star Trek and The Twilight Zone, and received many awards including the Hugo and the Nebula. He died in 1985 at age sixty-seven. A legendary author of mystery, horror, fantasy, and science-fiction stories, Harlan Ellison lives in Los Angeles, CA.
Loading...
or
Not Currently Available for Direct Purchase