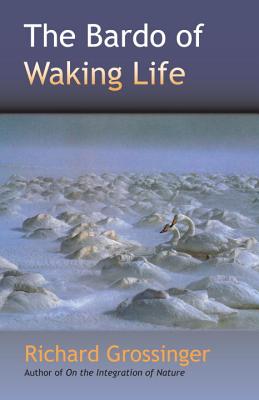 The Bardo of Waking Life (Paperback)

An avant garde set of improvisational essays, Richard Grossinger’s The Bardo of Waking Life is a meditation on the Tibetan Buddhist bardo realm which, in popular culture, is viewed as the bridge between lives, the state people enter after death and before rebirth. This book examines waking life and its history and language as if it were a bardo state rather than ultimate reality, and thus seeks a context for life (and dreams), even as it addresses more "mundane issues" including genetic theory, the war in Iraq and George W. Bush's presidency, North Korea, advertising, global warming, Prison Industrial Culture, childhood trauma, even country western music. Written with playfulness and precision, Bardo takes a new, probing approach to all the important questions of creation, destruction, and existence. In these intellectual field notes, Grossinger proves thematically fearless as he crosses quantum mechanics with totemic hexes and draws transcendental insight from the ephemeral space-time we call daily life. If, as Tibetan cosmology holds true, all conditional realms are bardos, then the state we all share is nothing less than the bardo of waking life.

Since the issuing of Solar Journal: Oecological Sections by Black Sparrow Press in 1970, Richard Grossinger has published some twenty-five books, most of them with his own press, North Atlantic Books/Frog, Ltd., but also titles with Harper, Doubleday, Sierra Club Books, J.P. Tarcher, among others. These have ranged from extremely long explorations of science, culture, and spirituality (The Night Sky, Planet Medicine, Embryogenesis) to memoirs and nonfiction novels (New Moon, Out of Babylon) to experimental prose (Book of the Earth and Sky, Spaces Wild and Tame) and science fiction (Mars: A Science Fiction Vision). Grossinger received a PhD in anthropology from the University of Michigan in 1975 and lives with his wife Lindy Hough in Berkeley, California.

Praise For The Bardo of Waking Life…

“Written with playfulness and precision, The Bardo of Waking Life takes a new, probing approach to all the important questions of creation, destruction, and existence.” —Horace Mann Magazine, Fall 2008“The Bardo of Waking Life is the eleven-dimensional consciousness of the Logos … like having a lucid dream with my eyes wide open, the sun at midnight filling up half the sky and the full moon at noon in the other half…. It’s a gift from the future, a magical artifact materialized out of a future dream.”—Rob Brezsny, author of Pronoia Is the Antidote to Paranoia“In this astonishing book, Richard Grossinger takes us on a layered journey of constant revelation, some measure of delight, and fleeting moments of despair, to a planet we dimly recognize for having dreamed it once. In fact, it’s not just a planet but a teeming esoteric realm of conscious existence, the mooring place of a ghostly boat which embarks and disembarks in the sea of our inner life.”—Mary Stark“I see this work as a swelling in the vast conspiracy of alertness that threads through the noise of the world, waking us to this leaf or that galaxy…. I want to praise it by saying it’s Not Even Right—it’s more important than what could ever readily slip into binary evaluations. It can’t be right, any more than a fox crossing the snow in the backyard can be right.”—Robert Kelly“From where I sit, The Bardo of Waking Life is full of the real grief of life’s predicament, all the way to the bone. And it is beautiful, and true, the whole cascade of painful, love-soaked delineations. I have glimpsed that coming unimaginable good, not as a vision or an idea, but as a shock of feeling upon waking from a dream like, ‘Oh my God, THIS is possible.’ And with that, an off-the-chart hope and a terrible fear rose together in me. THIS can happen, and it may not. So how am I to give myself effectively to IT happening? That is my main question.”—Robert Simmons, author of The Book of Stones
or
Not Currently Available for Direct Purchase
Copyright © 2020 American Booksellers Association