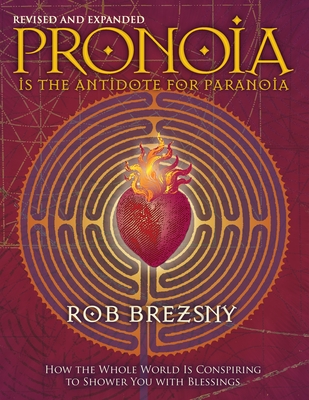 Pronoia Is the Antidote for Paranoia, Revised and Expanded

How the Whole World Is Conspiring to Shower You with Blessings

Readers were instantly beguiled by Rob Brezsny's new approach to the humble horoscope when his "Free Will Astrology" column first appeared in 1996. Instead of the generic, one-size-fits-all style of similar columns, Brezsny used witty parables, tender rants, cultural riffs, pagan wisdom, and lively rituals in his playfully positive readings. He brings that same sensibility—and the same message of a smiling universe—to this self-help book for people who may be skeptical about self-help books. Brezsny persuasively advises readers to go along with the universe's good intentions, but his rejection of cynicism and a bleak view of human nature isn't rooted in denial. On the contrary, he makes a case for a cagey optimism that requires a vigorous engagement with the dark forces. He asks us to rethink life as a sublime game created for our amusement and illumination. The book is a chameleon of a tome. You can read it straight through, slowly and surely, or else pick it up and open it at random for tasty hits of inspiration as the spirit moves you. You can even start at the end and weave your way backward. Brezsny has substantially updated this edition—he added nearly one hundred pages—by expanding various sections, adding more than a dozen new pieces and a new chapter, and providing readers with a number of playtime activities and exercises that let them participate through their own writing and drawing. "Brezsny's horoscopes are like little valentines, buoyant and spilling over with mischievousness. They're a soul prognosis." —The New York Times

Praise For Pronoia Is the Antidote for Paranoia, Revised and Expanded: How the Whole World Is Conspiring to Shower You with Blessings…

"I have seen the future of American literature and its name is Rob Brezsny."
—Tom Robbins, author of Still Life with Woodpecker, Jitterbug Perfume, and many more

"With this work—an instant pop classic—Rob Brezsny offers a positive, participatory, proactive vision of the workings of our inner and outer universe, which will only give us as much pleasure, love, and ecstasy as we are prepared to accept."
—Daniel Pinchbeck, author of 2012: The Return of Quetzalcoatl

"This wild, wise, and subversive book is a must read for those who want to live a more imaginative and free life . . . Rob Brezsny is a Culture Hero."
—Utne Reader

"I dig Rob Brezsny for his powerful yet playful insights, his poetry, and his humor . . . I salute him for his dedication to inspiration."
—Jason Mraz, singer-songwriter

"The verbally acrobatic, mystically literate Brezsny lets fly a thousand zingers, each with the feel of having been carved with poetic effort to express a hard reality instead of a platitude."
—San Francisco Chronicle

"Brilliant! Absorbing! Wildly useful! Rob Brezsny gets my nomination for best prophet in a starring role. He’s a script doctor for the soul."
—Marisa Tomei, actress

"With Pronoia, renegade wizard Rob Brezsny presents an irreverent manifesto, mixing activism and optimism. It reads like the I Ching on Ecstasy and is as insightful and puzzling as a Zen koan."
—Body + Soul

“If you read a snippet of [Pronoia] every day, you’re bound to experience more than a little bliss. We already loved Rob for his thoughtful and astute horoscopes…but those are mere glimpses of his abundant wisdom, humor, and encyclopedic storehouse of information. Sit down with this compendium of ruminations, suggestions and outlandish observations and let your imagination run wild.”
—Whole Life Times

“Pronoia depicts life as a gift whose purpose is to enrich the human soul… When you see life from this perspective, living takes on a newfound joy and illumination.”
—Spiritual Media Blog

“Like some voluble combination of HL Mencken and a Sufi whirling dervish, Brezsny writes with disarming fluidity while still remaining acerbic. Pronoia’s style is too sinuous, too wriggly and difficult to classify, edgy and uncomfortable and literally kick-ass (he advocates the athletic kicking of one’s own ass with some regularity).”
—Santa Fe Reporter

“I am deeply inspired by the illuminated words of Rob Brezsny. He is a word wizard for the soul."
—SARK, author of Succulent Wild Woman, Eat Mangoes Naked, and Change Your Life Without Getting Out of Bed

“You don't need The Church, a Savior, a Guru, or psilocybin mushrooms to ‘break on through to the other side.’ Brezsny takes you there in the pages of Pronoia. It’s the best book I’ve read in the 21st century!”
—Chris Duel, News-Talk 550 KTSA, San Antonio, Texas

“In Pronoia, Brezsny tenderly leads us into the practice of re-imagining the world as a compassionate miracle. It’s the best campaign platform I’ve heard in years. And the book offers a bevy of ideas for tricksters to re-create the universe. Brezsny for president!”
—Santa Cruz Sentinel

“Pronoia is like stepping through your very own magic looking glass. Brezsny is a diabolical lyricist, an infectious dreamer, and a riotous Doctor of Know.”
—Cathoderaytan.net

“In this age of divisiveness in politics and religion, it’s rare to come across something uplifting enough to catch your eye long enough for you to put down your remote and actually read something.”
—Chico News & Review

“Now, you might think that Pronoia is some kind of mealy new-aged crap, or yet another ‘business success/self-help’ rag. But you’d be wrong. It is, in fact, the most marvelous inanimate object I’ve ever held in my hands.”
—Corinna Bloom

“Pronoia is a food processor for the spirit, a socket wrench for attitude adjustment, and a garbage disposal for the soul. It shreds, dices, pulses, grinds, and disintegrates all the negative myths that the doom and gloomers throw our way, and blends them into a mind-soothing smoothie for vibrant living.”
—Rob Grogan, Front Porch

“Pronoia is a life manual for not just overthrowing the dictator within (and so without) but more vital than this, a manual for creating an intelligent, sexy and juicy alternative to the Big Should."
—Moonkissd.com

“If you know someone who is down on himself and the world, who spends most of his time complaining rather than creating (and who doesn’t know someone like that?) this is the perfect gift for him or her. Pronoia is filled with great uplifting information, and perhaps nothing says it better than the book’s tag line: ‘888 Tricks for Becoming a Wildly Disciplined, Fiercely Tender, Ironically Sincere, Scrupulously Curious, Aggressively Sensitive, Blasphemously Reverent, Lyrically Logical, Lustfully Compassionate Master of Rowdy Bliss.’”
—New Paradigm Digest

“With great zest and an inimitable creativity, Brezsny sees the present moment as the perfect moment. … Throughout this extraordinary book, he celebrates many of the qualities we have incorporated in our vision of Spiritual Literacy: imagination, wonder, gratitude, reverence, play, beauty, compassion, connections, mystery, and more. … Suffice it to say, this is a rollercoaster ride that surprises, entertains, and edifies in equal measures. It is the perfect resource to lift your spirits and send you on your way rejoicing!”
—Spirituality & Practice

As much a storyteller and social observer as astrologer, Rob Brezsny brings a literate, myth-savvy perspective to his astrological writing. "Free Will Astrology," his syndicated weekly column, appears in 120 publications all over the world.In addition to his books and column, Brezsny is a musician and has created five music albums. Three were with the band World Entertainment War, which recorded on MCA Records and was nominated for a Bammie, California's version of the Grammies. Bill Graham, one of rock's top impresarios, managed the band until his death. Brezsny is currently working on a new CD, This Is a Perfect Moment, which will serve as the soundtrack for the book Pronoia.Between 1979 and the present, Brezsny has performed in more than 700 shows, from intimate performance art venues to giant rock shows at the Whole Earth Festival in Davis, California. After leaving the rock music business for good in 2000, he branched out to develop a series of performance art shows, which he performed at the Burning Man Festival in 2001, 2002, and 2004. He lives in Mill Valley, CA.
Loading...
or support indie stores by buying on