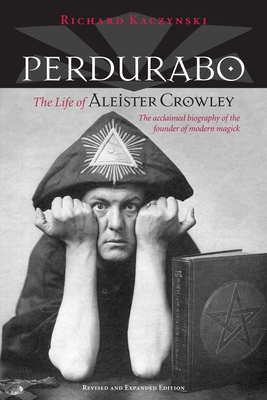 The Life of Aleister Crowley

A rigorously researched biography of the founder of modern magick, as well as a study of the occult, sexuality, Eastern religion, and more

The name “Aleister Crowley” instantly conjures visions of diabolic ceremonies and orgiastic indulgences—and while the sardonic Crowley would perhaps be the last to challenge such a view, he was also much more than “the Beast,” as this authoritative biography shows.

Perdurabo—entitled after the magical name Crowley chose when inducted into the Hermetic Order of the Golden Dawn—traces Crowley’s remarkable journey from his birth as the only son of a wealthy lay preacher to his death in a boarding house as the world’s foremost authority on magick. Along the way, he rebels against his conservative religious upbringing; befriends famous artists, writers, and philosophers (and becomes a poet himself); is attacked for his practice of “the black arts”; and teaches that science and magick can work together. While seeking to spread his infamous philosophy of, “Do what thou wilt shall be the whole of the Law,” Crowley becomes one of the most notorious figures of his day.

Based on Richard Kaczynski’s twenty years of research, and including previously unpublished biographical details, Perdurabo paints a memorable portrait of the man who inspired the counterculture and influenced generations of artists, punks, wiccans, and other denizens of the demimonde.

Praise For Perdurabo, Revised and Expanded Edition: The Life of Aleister Crowley…

“From a historical perspective, Perdurabo is the finest work on Crowley to date."
–Peter J. Morris, writer and blogger

“Although there have been several authoritative (and relatively impartial) bios of the occultist Aleister Crowley published in the last decade, in my opinion there is one that is definitely a cut above the rest. This would be Perdurabo by Richard Kaczynski, PhD. As ‘The definitive biography of the founder of modern magick,’ Kaczynski's revised and expanded edition of his 2002 offering is tirelessly researched (20 years!), highly detailed and loaded with photos, many of which are quite rare.”
–Toolband.com, official website of rock band TOOL

“Richard Kaczynski’s Perdurabo: the Life of Aleister Crowley is the one biography that is absolutely necessary for anyone who wishes to know more about one of the most creative, seminal, and misunderstood figures of the last hundred years.”
–David Tibet, founder of Current 93

"A brilliant essayist, a superior poet, and an extraordinary artist, mountaineer, and explorer, the Crowley presented in these witty and erudite pages is at once shocking, wise, egocentric, petty, inspirational and, most importantly, real. Roundly rejecting the pantomime villain at the center of previous biographies and deeply suspicious of the nonsensical hero-worship of some of his modern followers, Kaczynski's portrait of Crowley is balanced and well-informed.”
–Paul Feazey, LAShTAL.com

"Perdurabo is a magnificent biography not only on the colorful and fascinating figure himself, but on the occult, eastern religions, sexuality, and the attempt to apply the rigors of the scientific method to the so-called occult. Kaczynski does justice to Crowley’s life and thought, solidly placing him with other great spiritual development figures. Anybody who wants to learn about Crowley would enjoy this book, while more serious followers will appreciate the previously unpublished biographical details and photographs."
–Sacramento Book Review

“This is not only the most carefully-researched, detailed, and informative biography of Crowley yet written but also a remarkable insight into the nature of magic itself.”
–Ronald Hutton, author of The Triumph of the Moon and Blood and Mistletoe: The History of the Druids in Britain

“Several recently-published biographies of Crowley do justice, for the most part, to his life and works. But their offerings now stand like skeletal frames of unfinished houses next to Kaczynski’s magnificently constructed edifice. Every brick is set in place with the mortar of meticulous research and insight.”
–Lon Milo DuQuette, author of The Magick of Aleister Crowley

“At long last, the world has a balanced and readable biography that reflects how magick shaped every facet of Aleister Crowley’s life. And Dr. Kaczynski doesn’t dismiss magick as humbug or mumbo-jumbo but validates it as a legitimate method of spiritual development meriting serious study.”
–Christopher S. Hyatt, PhD, author of Undoing Yourself

“Richard Kaczynski uses a novelist’s touch to make this exceptionally well-researched book read like an adventure story. For the serious student of Ceremonial magick or anyone curious about the truth behind all those weird stories, it’s essential reading.”
–NewWitch magazine

Richard Kaczynski, Ph.D., is the author of The Weiser Concise Guide to Aleister Crowley, editor/annotator of a forthcoming edition of Crowley’s Sword of Song, and co-editor with Hymenaeus Beta of The Revival of Magick and Other Essays. He has been a student of the Western hermetic tradition since 1978, and has lectured internationally on these topics since 1990. His writing has appeared in numerous magazines (High Times, The Magical Link, Neshamah, Cheth, Mezlim, Eidolon, Different Worlds) and books (Concordance to the Holy Books of Thelema, The Golden Dawn Sourcebook, Rebels and Devils, People of the Earth). A research scientist and statistician with the VA Northeast Program Evaluation Center, Kaczynski is also affiliated with Yale University’s School of Medicine (Department of Psychiatry). He lives in Ellicott City, MD.
Loading...
or support indie stores by buying on