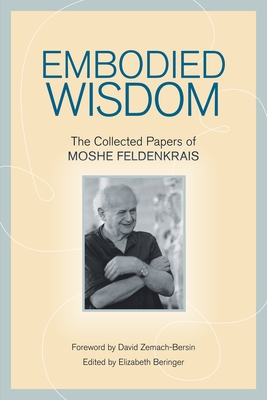 The Collected Papers of Moshe Feldenkrais

An educational system of neuromuscular re-education known for its gentle approach, the Feldenkrais Method has been shown to dramatically improve individual functioning by increasing self-awareness and facilitating new patterns of thinking, moving, and feeling. Intended for those who need to improve their movement repertoire for professional reasons–-dancers, musicians, martial artists, gymnasts, and athletes–-as well as those wishing to reduce pain or limitations in movement, Feldenkrais is based on the idea that learning to move better can improve anyone’s overall health on many levels.

Using Moshe Feldenkrais’s own words, Embodied Wisdom clearly explains the basic principles underpinning his techniques, Awareness Through Movement (ATM) and Functional Integration (FI). These thoughtful articles and lively, sometimes humorous interviews explore a diverse range of subjects: the importance of bodily expression, the primacy of hearing, the mind-body connection, martial arts, sleep and consciousness, movement and its effect on the mind. Embodied Wisdom gives readers the opportunity to deepen their understanding of the scientific and spiritual principles behind the Method and offers sound strategies for incorporating it into their lives.


Praise For Embodied Wisdom: The Collected Papers of Moshe Feldenkrais…

"Feldenkrais's work is innovative, gentle, and often strikingly effective.… I recommend the Feldenkrais Method to patients whose movement has been restricted by injury, cerebral palsy, stroke, fibromyalgia, and chronic pain. I also believe that the Feldenkrais Method can help all of us feel more comfortable in our bodies."
—Andrew Weil, MD

"Feldenkrais has studied the body in movement with a precision I have found nowhere else."
—Peter Brook, OBE, theater and film director

"This is the most sophisticated and effective method I have seen for the prevention and reversal of deterioration of function."
—Anthropologist Margaret Mead on the Feldenkrais Method

"Dr. Moshe Feldenkrais's method will be of great benefit to all of humanity. From my own experience, I know the remarkable results achieved."
—David Ben-Gurion, first prime minister of Israel

"Moshe Feldenkrais was one of the twentieth century's most original thinkers. This volume presents Feldenkrais's most concise and cohesive statements on the theory behind his work.… I hope the publicatio of this important and long-overdue book will help bring his ideas the recognition and the critical analysis they so deserve. I believe the Feldenkrais Method has the potential to help millions of people."
—David Zemach-Bersin, cofounder of the Feldenkrais Institute of New York

Dr. Moshe Feldenkrais, D.Sc., (1904–1984) was a distinguished scientist, physicist, and engineer, and the founder of the method that now bears his name. His insights contributed to the development of the new field of somatic education and continue to influence disciplines ranging from the arts to physical and occupational therapy.

Elizabeth Beringer studied directly with Feldenkrais and is one of the foremost teachers and trainers of the Method today.
Loading...
or
Not Currently Available for Direct Purchase