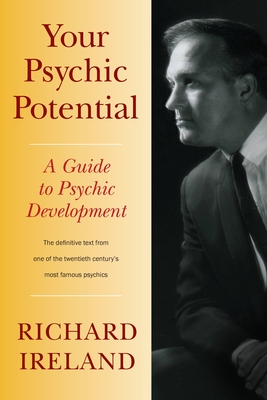 A Guide to Psychic Development

Known as the “Psychic to the Stars,” Richard Ireland counseled celebrities including Mae West, Amanda Blake, and Glenn Ford. Twelve years after Ireland’s death in 1992, his son Mark was sent this manuscript, written in 1973. Recently, as Mark Ireland recounts in the foreword, two psychic-mediums with no prior knowledge of the project have received messages suggesting that his father deliberately delayed the book’s release until now, when it would reach an audience more receptive to developing their psychic talents.

Your Psychic Potential includes a description of the four spheres/levels of psychic activity, an exploration of the relationship between artistic talents and the psychic, tests and experiments to help unleash psychic ability, a psychic’s diet and meditative exercises that support the freer flow of abilities, and tools to counter inhibitory fears. Anyone interested in discovering their extrasensory talents and achieving conscious control over them is sure to find this an indispensable guide.

Richard Ireland discovered his psychic gifts at the age of five. A minister in the National Association of Spiritualist Churches (NASC), he founded the interdenominational University of Life church in Phoenix in 1960 and shortly thereafter began appearing on radio and TV and in venues across the country. His autobiography, The Phoenix Oracle, was published in 1970.

Praise For Your Psychic Potential: A Guide to Psychic Development…

“Both charming and informative, Your Psychic Potential will appeal to the psychic-curious and to novice and advanced psychic practitioners alike.”
—Penney Peirce, expert intuitive and author of The Intuitive Way: The Definitive Guide to Increasing Your Awareness