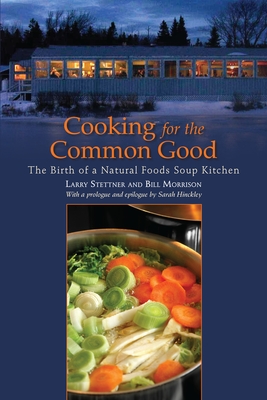 Cooking for the Common Good (Paperback)

The Birth of a Natural Foods Soup Kitchen

On Mount Desert Island, Maine, winter can mean six months of isolation and tough times, as year-round residents hunker down through the cold season. Larry Stettner and Bill Morrison vowed to change that. In November 2009, the Common Good Soup Kitchen opened its doors to the public, offering free soup as well as live music and a place for locals to gather, interact, and help each other. In its first winter of operation, the Common Good served over 10,000 bowls of soup to the community. Run entirely by donations, grants, and volunteer labor, the café also runs a distribution program to deliver soup to senior residences and others who cannot make it out to the café.

In Cooking for the Common Good, Stettner and Morrison argue that we need to radically rethink the concept of the soup kitchen, emphasizing true community building along with incorporating healthy and locally sourced food. The book includes a lively third-person narrative telling the story of how the Common Good Soup Kitchen was created; the authors' unique cooking philosophy; some of their most popular soup and salad recipes; and a full appendix with resources and a sample grant application for others interested in starting their own soup kitchen.

"Today access to whole foods, local organic foods, and sustainable fisheries is more important than ever for our well-being. But, because of economic inequities, good whole food is once again hard to get. Organic foods are largely available to the wealthiest and most privileged among us. Let us break down the bastions and make natural, whole food—including organically based soups—for everyone."
—from chapter 2, "The Soup Manifesto"

Larry Stettner grew up in Brooklyn, New York, and received his PhD in psychology from Stanford University in 1963. He subsequently worked for 35 years at Wayne State University in Detroit, Michigan, and published over 50 scientific articles and book chapters in the areas of animal behavior, emotion, and sexuality. His work as a consultant for the technical and professional division of the United Auto Workers led him to be listed in Who's Who in the American Labor Movement in the 1970s. After retiring to Maine he co-founded the Common Good Soup Kitchen and currently serves as its director. He lives in Southwest Harbor, Maine, with his wife Francine and their dog Sofia.

Bill Morrison has been working in the food industry for over 30 years as a chef, caterer, and restaurateur. He has cooked in Boston, Aspen, and on Mount Desert Island in Maine. He lives in Southwest Harbor, Maine, with his daughter Gillian.
or
Not Currently Available for Direct Purchase
Copyright © 2020 American Booksellers Association