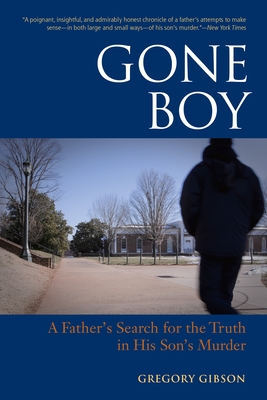 A Father's Search for the Truth in His Son's Murder

On December 14, 1992, Gregory Gibson’s eighteen-year-old son Galen was murdered, shot in the doorway of his college library by a fellow student gone berserk. The killer was jailed for life, but for Gibson the tragedy was still unfolding. The morning of the shooting, he learned, college officials had intercepted but not stopped a box of ammunition addressed to the murderer. They were also anonymously warned of the intended killing but failed to call the police. After years of frustrated attempts to find peace, Gibson woke one morning to a terrible vision of his own rage and helplessness. He knew he had to do something before he destroyed himself, and he resolved to discover and document the forces that led to Galen’s death.

Gone Boy follows Gibson as he visits the gun seller, as well as detectives, lawyers, psychiatrists, politicians, and college bureaucrats— a cast of characters as vivid as those in a Raymond Chandler mystery. Hailed by the New York Times and others for its evocative style and courage in confronting guns, violence, and manhood in America today, this wrenching memoir speaks in the voice of a man struggling to turn grief and rage into acceptance and understanding.

Praise For Gone Boy: A Father's Search for the Truth in His Son's Murder…

“A poignant, insightful, and admirably honest chronicle of a father’s attempts to make sense—in both large and small ways—of his son’s murder.”—New York Times

“Powerful … must-reading for everyone troubled by the epidemic of shootings.”—Time

“Gibson is a fine writer whose work rivals the subtleties of Norman Mailer's best fiction.”—Boston magazine

“Complex, surprising. … This book should be seriously considered by educational professionals, as well as by violence survivors who might benefit from Gibson's singular odyssey.”—Kirkus Reviews

“Gibson is one of those rare birds whose humanism is a result of his innate curiosity about people. He's not interested in demonizing anyone, and he readily admits how people confound his expectations. To his great credit, Gibson writes about everyone he meets as an irreducibly complex human being.”—Salon

Gregory Gibson is an antiquarian bookseller. When Gone Boy was first published, he began speaking at conferences, seminars, schools, and churches on victim’s issues, gun violence, and school safety. He lives in Gloucester, MA.