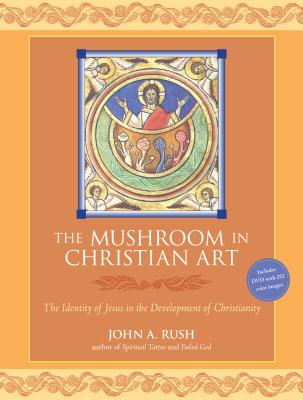 The Mushroom in Christian Art

The Identity of Jesus in the Development of Christianity

In The Mushroom in Christian Art, author John A. Rush uses an artistic motif to define the nature of Christian art, establish the identity of Jesus, and expose the motive for his murder. Covering Christian art from 200 CE (common era) to the present, the author reveals that Jesus, the Teacher of Righteousness mentioned in the Dead Sea Scrolls, is a personification of the Holy Mushroom, Amanita muscaria. The mushroom, Rush argues, symbolizes numerous mind-altering substances—psychoactive mushrooms, cannabis, henbane, and mandrake—used by the early, more experimentally minded Christian sects.

Drawing on primary historical sources, Rush traces the history—and face—of Jesus as being constructed and codified only after 325 CE. The author relates Jesus’s life to a mushroom typology, discovering its presence, disguised, in early Christian art. In the process, he reveals the ritual nature of the original Christian cults, rites, and rituals, including mushroom use. The book authoritatively uncovers Jesus’s message of peace, love, and spiritual growth and proposes his murder as a conspiracy by powerful reactionary forces who would replace that message with the oppressive religious-political system that endures to this day. Rush’s use of the mushroom motif as a springboard for challenging mainstream views of Western religious history is both provocative and persuasive.

The package includes a link to 252 striking color images depicting Christian art, with key motifs indicated by the author.

Praise For The Mushroom in Christian Art: The Identity of Jesus in the Development of Christianity…

“A picture is worth a thousand words. In this enlightening book, and on the well-illustrated DVD, John Rush identifies the real Jesus and argues convincingly for the prevalence of the historical, religious use of hallucinogenic mushrooms in Christianity.”
—Jan Irvin, author of The Holy Mushroom.

“Going beyond the identification of putative fungal shapes in the religious art of Europe, John Rush has provided an eloquent and sophisticated context for their significance, a kind of grammar of symbolic forms, lavishly illustrated, opening up an essential topic of dialogue for anyone interested in understanding the creative imagination of this vast and intriguing period of history.”
—Carl Ruck, professor of Classics at Boston University and author of Sacred Mushrooms of the Goddess: Secrets of Eleusis

“The Mushroom in Christian Art is a valuable addition to the growing corpus on the question of whether hallucinogens played a central role in Christianity and, as such, is well worth the read.”
—The Psychedelic Press UK

John A. Rush, PhD, ND, is a professor of anthropology at Sierra College in Rocklin, California. His research has ranged from religious symbolism in Europe to monuments and Mayan astronomy in Central America. He is also the author of Failed God, Spiritual Tattoo, and The Twelve Gates.
Loading...
or
Not Currently Available for Direct Purchase