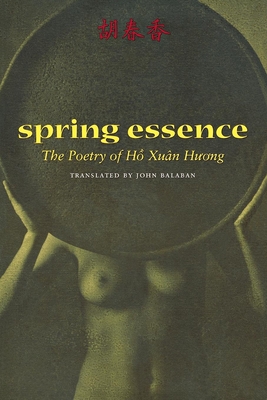 The Poetry of Ho Xuan Huong

Sometimes books really do change the world... This one will set in motion a project that may transform Vietnamese culture.--Utne Reader

Ho Xuan Huong--whose name translates as Spring Essence--is one of the most important and popular poets in Vietnam. A concubine, she became renowned for her poetic skills, writing subtly risque poems which used double entendre and sexual innuendo as a vehicle for social, religious, and political commentary.

The publication of Spring Essence is a major historical and cultural event. It features a tri-graphic presentation of English translations alongside both the modern Vietnamese alphabet and the nearly extinct calligraphic Nom writing system, the hand-drawn calligraphy in which Ho Xuan Huong originally wrote her poems. It represents the first time that this calligraphy--the carrier of Vietnamese culture for over a thousand years--will be printed using moveable type. From the technology demonstrated in this book scholars worldwide can begin to recover an important part of Vietnam's literary history. Meanwhile, readers of all interests will be fascinated by the poetry of Ho Xuan Huong, and the scholarship of John Balaban.

It's not every day that a poet gets to save a language, although some might argue that is precisely the point of poetry.-- Publishers Weekly

In the simple landscape of daily objects-jackfruit, river snails, a loom, a chess set, and perhaps most famously a paper fan--Ho found metaphors for sex, which turned into trenchant indictments of the plight of women and the arrogance, hypocrisy and corruption of men... Balaban's deft translations are a beautiful and significant contribution to the West's growing awareness of Vietnam's splendid literary heritage.--The New York Times Book Review

The translator, John Balaban, was twice a National Book Award finalist for his own poetry and is one of the preeminent American authorities on Vietnamese literature. During the war Balaban served as a conscientious objector, working to bring war-injured children better medical care. He later returned to Vietnam to record folk poetry. Like Alan Lomax's pioneering work in American music, Balaban was to first to record Vietnam's oral tradition. This important work led him to the poetry of H Xu n Huong.

Ngo Than Nhan, a computational linguist from NYU's Courant Institute of Mathematics, has digitized the ancient Nom calligraphy.

John Balaban is the author of a dozen books of poetry, prose, and Vietnamese translations whose prizes include the Lamont Award, the William Carlos Williams Award, and two National Book Award nominations. His work has been featured on NPR's Fresh Air, New York Times, and Utne Reader. He teaches at North Carolina State University.
Loading...
or support indie stores by buying on