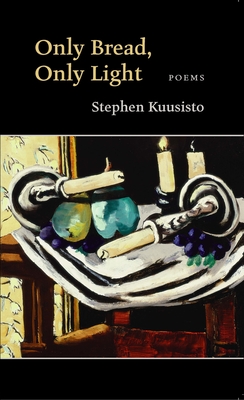 Only Bread, Only Light

With this, his first collection of poetry, Stephen Kuusisto (author of the memoir Planet of the Blind) explores blindness and curiosity, loneliness and the found instruments of continuation. Exploiting the seeming contradiction of poetry's reliance upon visual imagery with Kuusisto's own sightlessness, these poems cultivate a world of listening: to the natural world, to the voices of family and strangers, to music and the words of great writers and thinkers.
Kuusisto has written elsewhere, I see like a person who looks through a kaleidoscope; my impressions of the world at once beautiful and largely useless. So it is no surprise that in his poems mortal vision is uncertain, supported only by the ardor of imagination and the grace of lyric surprise. Sensually rich and detailed, Kuusisto's poems are humorous, complex, and intellectually engaged. This collection reveals a major new poetic talent. Only Bread, Only Light At times the blind see light,
And that moment is the Sistine ceiling,
Grace among buildings--no one asks
For it, no one asks. After all, this is solitude,
Daylight's finger, Blake's angel
Parting willow leaves. I should know better.
Get with the business Of walking the lovely, satisfied,
Indifferent weather-- Bread baking
On Arthur Avenue This first warm day of June.
I stand on the corner For priceless seconds.
Now everything to me falls shadow Stephen Kuusisto's 1998 memoir Planet of the Blind received tremendous international attention, including appearances on Oprah, Dateline, and Talk of the Nation. The New York Times named it a Notable Book of the Year and praised it as a book that makes the reader understand the terrifying experience of blindness, a book that stands on its own as the lyrical memoir of a poet. A spokesperson for Guiding Eyes for the Blind, Kuusisto teaches at Ohio State University.