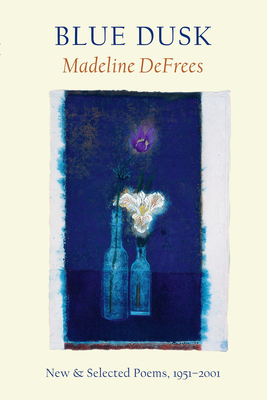 Contradiction and ambiguity are essential to the poetry of Madeline DeFrees. Her work is concentrated, multi-layered, spliced with humor and characterized by a passionate interest in every aspect of words: their literal and figurative meanings and associations; their histories, usage, disappearances, and resurrections. In her recent poems she approaches complex subjects with a new clarity, the dividend of a long investment in the art of writing.

Just as her poetry demands distance from personal biography and revelation, it is also deeply affected by her own life story, most profoundly her 38-year tenure as a nun. Throughout her writing career--from her early poems written under the name Sister Mary Gilbert, to her newest ones in which she casts a lifelong glance back through history and lineage--the need to reclaim individual identity is balanced against the relinquishment of the self.

From Going Back to the Convent

What was I running from
or into? The uneasy light of the senior
prom? Mother's dream of a a child bride, supported by
pennies from heaven? Or was it the writing
life laid as a sacrifice to a jealous god
on the tomb of the woman
I'd hoped to become?
Whatever it was, it will soon
Be over. I write this now to reclaim it.


A student of John Berryman, Karl Shapiro, and Robert Fitzgerald, Madeline DeFrees has taught generations of poets and poetry students, and earned widespread acclaim for her own work. Madeline DeFrees has taught throughout the US, including at the University of Montana and the University of Massachusetts, Amherst, where she directed its Creative Writing program. She presently lives in Seattle, WA.