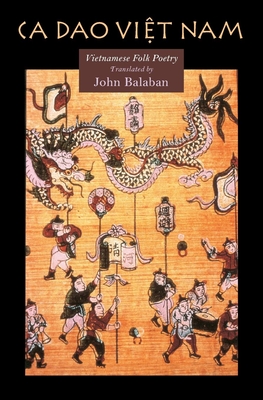 During the Vietnam war, John Balaban traveled the Vietnamese countryside alone, taping, transcribing, and translating oral folk poems known as ca dao. No one had ever done this before, and it was Balaban's belief that his project would help end the war.

The young American poet walked up to farmers, fishermen, seamstresses, and monks and said, Sing me your favorite poem, and they did. Folk poetry is so much a part of everybody's life, my request didn't seem like such a strange proposition, Balaban writes.

The resulting collection--the first in any Western -language--became a phenomenon within the American Vietnamese community, but the book slipped out of print after the original publisher folded in the '70s. This revised, bilingual edition includes new poems and an eloquent introduction explicating poetry's importance in Vietnamese culture.

The Painting
The stream runs clear to its stones;
the fish swim in sharp outline.
Girl, turn your face for me to draw.
Tomorrow, if we should drift apart,
I shall find you by this picture.


In early dynasties, Chinese emperors used to send out officials to record the poetry of the common people because folk songs were believed to be the truest indicators of popular feeling. . . . Consider this book such a sampling. Take it as a guide and enter this world of Taoist sages, parted lovers, melon gardens, concubines, exiled kings, wheeling egrets, rice paddies, bamboo bridges, shimmering moons, and fishtraps.--from the introduction

These oral poems are direct (though not beyond slyness), simple in language, poignant. . . . Recommended for all collections.--Library Journal

John Balaban is the author of 11 books of poetry, prose, and Vietnamese translations. His Spring Essence: The Poetry of H Xu n Huong, has sold 20,000 copies. He lives in Raleigh, North Carolina, where he teaches at North Carolina State University.

John Balaban is the author of a dozen books of poetry, prose, and Vietnamese translations whose prizes include the Lamont Award, the William Carlos Williams Award, and two National Book Award nominations. His work has been featured on NPR's Fresh Air, New York Times, and Utne Reader. He teaches at North Carolina State University.
Loading...
or support indie stores by buying on