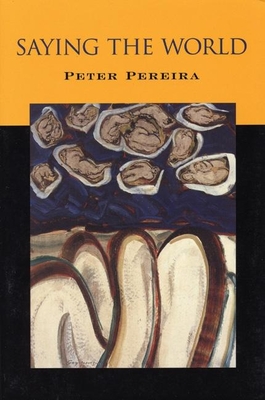 Peter Pereira is at the forefront of a national movement of medical practitioners who utilize literature as a part of their training. Saying the World arises from his practice as a family physician serving the urban poor, as well as his experience as a childless gay man.

Selected from over one thousand entries in the Hayden Carruth Award, judges Gregory Orr and Sam Hamill cited Pereira's work as full of stunning poems and noted that Pereira has the magic touch that William Carlos Williams had--the ability to be doctor and poet simultaneously, and to make it all so simply, deeply, and translucently human that the poems seem inevitable.

Hold it like a wand, you say
as I guide the blade across shaved skin,
into layers of yellow fat and fascia
stained crimson. With gloved fingers
we tug at the wound's gaping edges
until we've exposed the bulging uterus,
round and smooth as a giant D'Anjou pear.
Only minutes ago, I wrote the words fetal distress
and panting she signed consent to open her belly.
Now I imagine her baby is like Houdini
jacketed inside a treasure chest five fathoms
down, mouth gagged, lungs bursting, time running
out . . .

Peter Pereira is a family physician in Seattle and currently provides primary care to an urban poor population, including refugees, immigrants, and the elderly. He is the winner of a Discovery/The Nation Award, and his poems have appeared in numerous literary magazines, including JAMA, Poetry, The Virginia Quarterly Review, and in the anthology To Come to Light: Perspectives on Chronic Illness in Modern Literature.