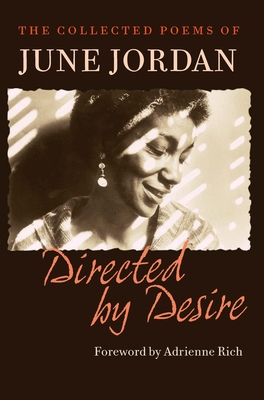 The Collected Poems of June Jordan

"Directed by Desire . . . is a powerful addition to the entire canon of American poetry."--Booklist

Now in paperback, Directed by Desire is the definitive overview of June Jordan's -poetry. Collecting the finest work from Jordan's ten volumes, as well as dozens of "last poems" that were never published in Jordan's lifetime, these more than six hundred pages overflow with intimate lyricism, elegance, fury, meditative solos, and dazzling vernacular riffs.

As Adrienne Rich writes in her introduction, June Jordan "wanted her readers, listeners, students, to feel their own latent power--of the word, the deed, of their own beauty and intrinsic value."

These poems
they are things that I do
in the dark
reaching for you
whoever you are
and
are you ready?


The cloth edition of Directed by Desire was selected as a Library Journal Poetry Book of the Year and received the Lambda Book Award for Lesbian Poetry.

June Jordan taught at UC Berkeley for many years and founded Poetry for the People. Her twenty-eight books include poetry, essays, fiction, and children's books. She was a regular columnist for The Progressive and a prolific writer whose articles appeared in The Village Voice, The New York Times, Ms. Magazine, and The Nation. After her death in 2002, a school in the San Francisco School District was renamed in her honor.

June Jordan was born in Harlem. Her twenty-eight books include poetry, essays, and children's books. A beloved teacher and exuberant activist, she founded Poetry For the People, and was a regular columnist for The Progressive and a prolific writer whose articles appeared in The Village Voice, The New York Times, Ms., and Essence. She died of breast cancer in 2002.
Loading...
or support indie stores by buying on