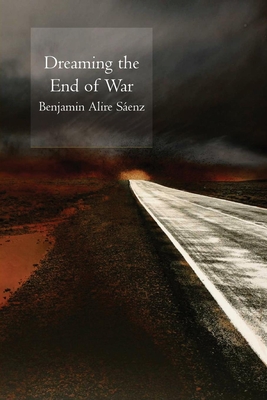 Dreaming the End of War

This gripping suite of twelve dreams, infused with the conflict along the border of Mexico and the United States, traces humanity's addiction to violence and killing--from boys stepping on ants to men shooting animals, men shooting women, men shooting enemies. The Dreams begin in a desert landscape where poverty and wealth grate against each other, and the ever present war becomes "as invisible as the desert sands we trample on." The dreams, however, move toward a greater peace with S enz providing an unforgettable reading experience.

From "The Fourth Dream: Families and Flags and Revenge"

I don't believe a flag
is important
enough to kiss--
or even burn.

Some men would hate me
enough to kill me
if they read these words.

"Rage," S enz said in an interview, "must be a component of any writer's life. But this rage must also be contained--otherwise our very bodies will become chaos--our minds will become chaos. We need order." S enz finds that order in poems, transforming his rage into something "more beautiful and gracious and forgiving."

Poet and novelist Benjamin S enz has written 10 books of poetry and prose, most recently In Perfect Light (HarperCollins). He was a Catholic priest, doing missionary and charity work in London, Tanzania, and the barrio parishes of El Paso, Texas. Upon leaving the priesthood, he was awarded a Stegner Fellowship at Stanford University. He teaches in the MFA program at University of Texas, El Paso.