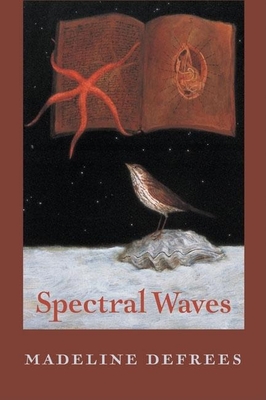 "DeFrees is committed to rigorous, even ritualistic, forms and a dense economy and precision of language."--Poetry

Brimming with characteristic charm and careful regard, Madeline DeFrees ranges in scope and scale from sonnets about Elvis, a poem-cycle about sculptor Henry Moore, and lyrics about cataracts. DeFrees's poems are filled with daily encounters--birds outside the window, trips to the doctor, the plants in her well-tended garden--yet she brilliantly elevates these subjects beyond the personal.

From "A Crown of Sonnets for 'The King'"

Although the mourners know his fate is sealed
they can't give up on God, Who may come through.
They cast about for something more to do:
into Emergency, the patient's wheeled.
The human curtain parts. Aides leave the field
to doctors who inject the heart and who
start IV drips, then shock a time or two
the organ grown so large with caring that it failed.


Why are we working on this corpse? The nurse
throws up her hands. The crew, shocked back to normal,
admits discretion is the better part of valor.
They'll stare suspicion down, advise, rehearse
the clothes that Elvis wears for his last formal.
Up to this moment, blue was his favorite color.

At 17, Madeline DeFrees entered a Catholic convent and remained a nun for 38 years. She has published nine volumes of poetry and has taught at universities and colleges throughout the United States. Her most recent book, Blue Dusk, won the Lenore Marshall/The Nation prize. She lives in Seattle.