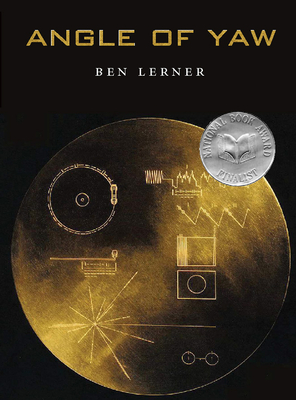 In his bold second book, Ben Lerner molds philosophical insight, political outrage, and personal experience into a devastating critique of mass society. Angle of Yaw investigates the fate of public space, public speech, and how the technologies of viewing--aerial photography in particular--feed our culture an image of itself. And it's a spectacular view.

The man observes the action on the field with the tiny television he brought to the stadium. He is topless, painted gold, bewigged. His exaggerated foam index finger indicates the giant screen upon which his own image is now displayed, a model of fanaticism. He watches the image of his watching the image on his portable TV on his portable TV. He suddenly stands with arms upraised and initiates the wave that will consume him.

Haunted by our current "war on terror," much of the book was written while Lerner was living in Madrid (at the time of the Atocha bombings and their political aftermath), as the author steeped himself in the history of Franco and fascism. Regardless of when or where it was written, Angle of Yaw will further establish Ben Lerner as one of our most intriguing and least predictable poets.

Ben Lerner is from Topeka, Kansas, and holds a B.A and M.F.A. from Brown University. A former Fulbright Scholar in Madrid, Lerner co-founded No: a journal of the arts. His first book, The Lichtenberg Figures, won the Hayden Carruth Award and was named one of the year's best books of poetry by Library Journal.
Loading...
or support indie stores by buying on