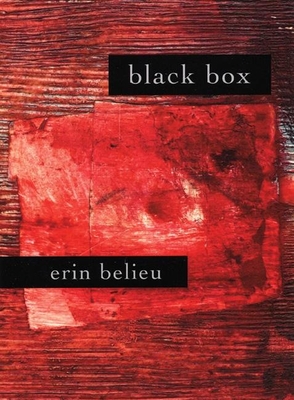 Black Box is a raw, intense book, fueled by a devastating infidelity. With her marriage shattered, Erin Belieu sifts the wreckage for the black box, the record of disaster. Propelled by a blistering and clarifying rage, she composed at fever pitch and produced riveting, unforgettable poems, such as the ten-part sequence "In the Red Dress I Wear to Your Funeral"

I root through your remains,
looking for the black box. Nothing left
but glossy chunks, a pimp's platinum
tooth clanking inside the urn. I play you
over and over, my beloved conspiracy,
my personal Zapruder film--look. . .

When Belieu was invited by the Poetry Foundation to keep a public journal on their new website, readers responded to the Black Box poems, calling them "dark, twisted, disturbed, and disturbing" and Belieu a "frightening genius." All true.

Erin Belieu was born and raised in Nebraska and educated at the University of Nebraska, Ohio State, and Boston University. She is the author of three collections of poetry. Her debut, Infanta, was selected for the National Poetry Series and named one of the best books of that year by Library Journal, the National Book Critics' Circle, and Washington Post.
Loading...
or
Not Currently Available for Direct Purchase