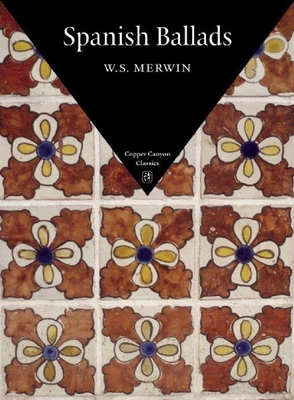 When W.S. Merwin was a young poet, Ezra Pound advised him to "read the seeds of poetry, not the twigs." As the ballads of Spain are among those essential seeds, Merwin set out to select and translate a collection of them into English.

Few, if any, popular poetic traditions compare to that of the ballads in the culture of Spain. These terse, passionate, and often violent poems have been remembered, repeated, and loved for centuries throughout the Spanish-speaking world. Evolving from the epic song, this unique poetic genre has influenced the drama of the Golden Age, the novel, and lyric verse of the present day.

For this volume--long out of print and reissued in the new series Copper Canyon Classics--W.S. Merwin selected representative examples of every kind of ballad: from episodic story poems to unusual "wonder-mongering" songs. Grouped by kind and arranged in chronological order, these poems provide an essential key to Spanish culture from the late Middle Ages to the twentieth century.

Merwin approached this project humbly and notes in his introduction: "My aim was not to produce a series of virtuoso performances but a group of translations which would be faithful and readable, and would get in the way of the originals as little as possible."

W.S. Merwin is the author of over fifty books of poetry, prose, and translation. He has earned nearly every major literary prize, including the Pulitzer Prize and the National Book Award. He lives in Hawaii.

W.S. Merwin is the author of over fifty books of poetry, prose, and translations. He has earned every major literary prize, most recently the National Book Award for Migration: New and Selected Poems. He lives in Hawaii where he raised endangered palm trees.
Loading...
or support indie stores by buying on