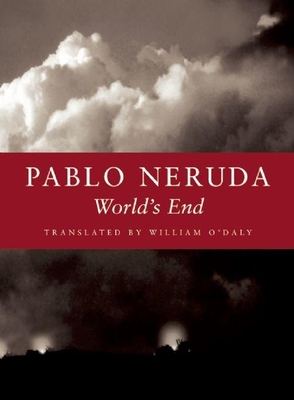 "World's End, like much Neruda, contains bewildering multitudes. Some poems incite, others console, as the poet--maestro of his own response and impresario of ours--Looks inward and out.--Los Angeles Times

"We are faced with the unavoidable task of critical communication within a world which is empty and is not less full of injustices, punishments and sufferings because it is empty."--from Pablo Neruda's Nobel Prize address

This is the first complete English language translation of the late work by Neruda, the greatest of Latin American poets, translated by O'Daly, a specialist in Neruda's late and posthumous work....Highly recommended for poetry and Latin American collections.
--Library Journal

William O. Daly's translation of Pablo Neruda's book-length poem, Fin de mundo, is a veritable poet's companion and guide to the twentieth century. This is Pablo Neruda at his best and most honest....Neruda's poems are a quiet but potent celebration of the resilience of the human spirit.--Sacramento Book Review

In this book-length poem, completely translated for the first time into English and presented in a bilingual format, Nobel Laureate Pablo Neruda composes a "valediction to the Sixties" and confronts a grim disillusionment growing inside him. Terrifying, beautiful, vast, and energized, Neruda's work speaks of oppression and warfare, his own guilt, and the ubiquitous fear that came to haunt the century that promised to end all wars.

World's End also marks the final book in Copper Canyon's dynamic nine-book series of Neruda's late and posthumous work. These best-selling books have become perennial favorites of poetry readers, librarians, and teachers. Through this series, translator William O'Daly has been recognized as one of the world's most insightful caretakers of Neruda's poetry, and Publishers Weekly praised his efforts as "awe-inspiring."

My truest vocation
was to become a mill:
singing in the water, I studied
the motives of transparency
and learned from the abundant wheat
the identity that repeats itself.

Pablo Neruda is one of the world's beloved poets. He served as a Chilean diplomat and won the Nobel Prize in 1971.

William O'Daly has dedicated thirty years to translating the late and posthumous work of Pablo Neruda. He lives in California.

Pablo Neruda (1904-1973) held diplomatic posts in Asian and European countries. After joining the Communist Party, Neruda was elected to the Chilean Senate but was forced to live in exile in Mexico for several years. Eventually he established a permanent home on Isla Negra. In 1970 he was appointed as Chile's ambassador to France; in 1971 he was awarded the Nobel Prize in Literature. William O'Daly is one of the most celebrated translators of the poetry of Pablo Neruda. He lives in California.
Loading...
or support indie stores by buying on