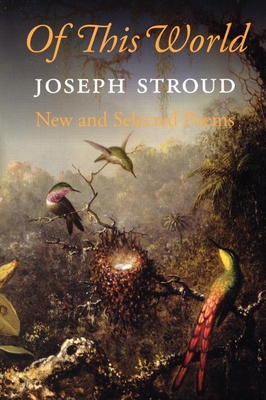 "A book by Joseph Stroud is a rare and exciting event."--The Bloomsbury Review

In just four books since the 1960s, the calm, California-based writer--whose works also describe his travels in Vietnam, Laos, India and even the Solomon Islands--has gathered devotees to his pellucid free verse with its unpretentious, unbuttoned feel and its Buddhist overtones. --Publishers Weekly

(Stroud's) poems speak from around the globe: Venice, London, Santo Domingo, Guatemala, Vietnam, Santa Cruz, Singapore. Stroud enters the minds of painters such as Goya, Brueghel, and Giotto Bondone, and he pays homage to the poets Blake, Milton, Smart, Lorca, Machado, and Jeffers....Many of the poems own a clarity that opens to unexpected emotional depths. One would be tempted to call them Zen poems because all have a quiet at the core, but they also love the surfaces.--ForeWord

Reading Joseph Stroud's Of This World: New and Selected Poems, two words come to mind, namely 'breadth' and 'breath.' 'Breadth' because of his unerring command of odes, prose poems, sestets, etc....And 'breath' because of each poem's sure-footed movement....Make no mistake, however, these are not sleepy meditations that go up in incense smoke, but fleshy encounters, sensuous reveries, poems that are as much throbbing taproots as they are like that imaginary wingless bird that never lands, or, in other words, poems that flock as much as they flow. --Bookslut

Joseph Stroud knows the value of taking one's proper time to write poems, and taking great care when presenting a book to the world. Stroud has published four books in forty years, and his work has earned a devoted audience, including Jane Hirschfield, Ted Kooser, and Jim Harrison. Of This World includes the best from Stroud's previous volumes, as well as a series of new poems and translations.

The Georgia Review observed that "Joseph Stroud moves easily from the concise to the voluptuous." He does this through various forms--compressed lyrics, longer narratives, odes, expansive prose poems. Informed by the qualities of clarity and compassion, and inspired by artists and writers as diverse as Li Po, Neruda, and Giotto, Stroud articulates a reverential attention to the world, and a commitment to revelations found beyond the self.

Across the ravine from the mill house there's a grassy patch
where gypsies keep a donkey tied to a tree. Sometimes
I'll cross the stream and bring him an apple, holding it out
like a rare jewel. He'll contemplate it, then take my whole
hand into his lips as soft as suede, and I can't tell how he
does it, but when his head lifts back, the apple has disappeared.


Joseph Stroud is the recipient of the prestigious Witter Bynner Fellowship from the Library of Congress. His poems have been featured on National Public Radio, Los Angeles Times, and The Washington Post. He splits his time between Santa Cruz, California, and a hand-built cabin in the Sierras.

Joseph Stroud is the author of four books of poetry, and his poems have been widely anthologized as well as featured on Garrison Keillor's The Writer's Almanac. Stroud lives in Santa Cruz, California, and at Shay Creek in the Sierra Nevada mountains.
Loading...
or support indie stores by buying on