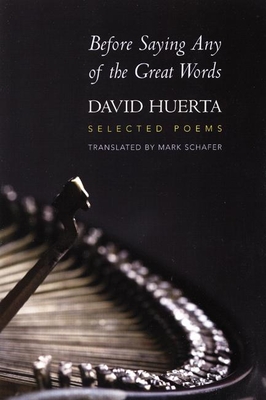 Before Saying Any of the Great Words (Paperback)

"Schafer makes Huerta, who might be seen as 'difficult, ' accesible to readers without sacrificing any of the startling images, leaps of meaning, and emotional resonance the poet uses to great effect....Copper Canyon Press continues its highly regarded and important task of providing English-language readers with the best of poetry from Mexico, as well as many other parts of the world....Those who are interested in the poetry of our close neighbor to the south, or simply good poetry, will find David Huerta's latest collection a remarkable and satisfying read."
--"ForeWord"

"For the first time, American readers will discover that Mexican poetry has continued in the tradition of greats like Octavio Paz and Jose Emilio Pacheco, but also that writers like Huerta have transported Mexico's poetic legacy onto a whole new plane of the imagination."
--"The Bloomsbury Review"

David Huerta is one of the leading contemporary poets in Mexico, and "Before Saying Any of the Great Words "is the first comprehensive bilingual anthology of his work. This volume highlights poems from nineteen books and includes the first-ever English translation of Huerta's monumental book-length poem "Incurable," which one critic called "a masterpiece of poetry in Spanish in the twentieth century."

Huerta has been a central figure in two of the most influential poetic movements in late-twentieth-century Latin America--the neobaroque movement and that of "postmodern" language poetry. Huerta's imagery, intertextuality, and dense lyricism remain unparalleled in Mexican letters. In addition, Huerta's poetry frequently questions the capacity of language to express human experience, even while his passionate use of language consistently disproves this doubt.

"I appear in the saliva of the angel, facing my illusory sheets of paper--flapping loose in the whiteness of dawn
and about to immerse themselves in the inky second hand, written or wroten, adorned with drunken deletions,
like a groomed lawn in the mountain of my body, like the lukewarm drug of the Unicorn who opens its eyes amid the residues, amid the interstices, amid what is happening."

David Huerta is the author of nineteen books of poetry and is widely regarded as Mexico's finest living poet. He has long been a voice of political activism and is currently a political columnist for the Mexican weekly "Proceso"; he is also a professor of literature at Mexico City's Universidad Nacional Autonoma de Mexico.

David Huerta is widely regarded as Mexico's finest living poet. He is the author of 25 books of poems, a political columnist for Proceso, and a professor of literature at UNAM. In 2006 he was awarded the prestigious Xavier Villarrutia Prize for lifelong contributions to Mexican literature. Schafer is the translator of numerous books of poetry and fiction from Latin America, including the prose of Eduardo Galeano, Alberto Ruy Sanchez, and Jesus Gardea and the poetry of Gloria Gervitz, Alberto Blanco, and many others. He lives in Boston.
or
Not Currently Available for Direct Purchase
Copyright © 2020 American Booksellers Association