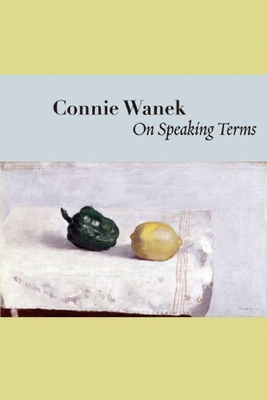 "Connie Wanek . . . is superb, mature and] a master of mood and language."--St. Paul Pioneer Press

"No poet I know, with the exception of Jane Kenyon, is as able to discover the magic and depth in ordinary, day-to-day life and to artfully render that vision for the reader."--Louis Jenkins

Connie Wanek's third book of poems, On Speaking Terms, is amusing, tender, and surprising. Herself a librarian in Duluth, Minnesota, Wanek's poems emerge from everyday objects--Scrabble, garlic, lipstick, hawkweed--and the landscapes, waterscapes, and severe winters of the upper Midwest. Readers will shove off in canoes, buckle on skis, set fishing nets in Lake Superior, and spend time in the real world of the imagination. Lit by startling metaphors, Wanek's work has been justly compared to Wislawa Szymborska's for its wry wit and spare "Eastern European" sensibility.

. . . Afterwards it was Eve who made
the first snowman, her second sin, and she laughed
as she rolled up the wet white carpet
and lifted the wee head into place.
"And God causeth the sun to melt her labors,
for He was a jealous God."


Connie Wanek is the author of two books of poems. She lives in Duluth, Minnesota, where she is a public librarian and renovates old houses with her husband. Her poems have appeared in many journals, including The Atlantic Monthly and Poetry. In 2006 she was named a Witter Bynner Fellow in Poetry from the Library of Congress.

Connie Wanek is the author of two books of poems. She lives in Duluth, Minnesota, where she is a librarian and renovates old houses with her husband. Her poems have appeared in many journals, including Atlantic Monthly, Poetry, and Country Journal. In 2006 she was selected by Poet Laureate Ted Kooser as a Witter Bynner Fellow in Poetry.
Loading...
or support indie stores by buying on