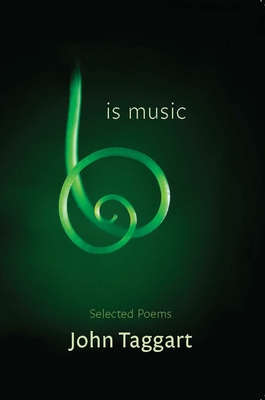 Is Music--a major retrospective of an American original--gathers the best poems from John Taggart's fourteen volumes, ranging from early objectivist experiments and jazz-influenced improvisational pieces to longer breathtaking compositions regarded as underground masterpieces. There is a prayerful quality to Taggart's poetry, rooted in music--from medieval Christian traditions and soul to American punk rock. He is also heavily influenced by the visual arts, most notably in his classic "Slow Song for Mark Rothko," in which he did with words what Rothko did with paint and dye.

A fearsome intelligence wedded to a kind of craftsmanship that happens once or twice a generation.--Stop Press

"In the lovely sonnet 'Orange Berries Dark Green Leaves, ' Taggart seems to look at nature himself, rather than through another artist's eyes: 'Darkened not completely dark let us walk in the darkened field/trees in the field outlined against that which is less dark.' Is Music contains many such pieces, a wealth of sublime and quiet poems; they are unlike anything being written today, and like good music they stay in the mind."--The Antioch Review

John Taggart has long been a master of accumulating complexly layered patterns of sound and sense.--Robert Creeley

"John Taggart's poetry is not like music, it is music."--George Oppen

The long overdue selection of John Taggart's work, Is Music, reminds us that a good deal of his work, in cutting new songs from old, is transcription. 'Marvin Gaye Suite' opens with the opening of the soul singer's album, What's Going On: '17 seconds of party formulaics by professional football players / intro of 17 seconds of hey man what's happening and right on.' Like Gaye's voice throughout the album, the voice in Taggart's poem--and this is true throughout his work - is multitracked into a call and response with itself and with the world."--Sink

To sing as the host sings in his house.

John Taggart is the author of fourteen books of poetry and two books of criticism. He was, for many years, a professor of English and director of the Interdisciplinary Arts Program at Shippensburg University. He lives near Shippensburg, Pennsylvania.

John Taggart is the author of thirteen books of poetry and two books of criticism. During the late 1960s and early 1970s, he was the editor and publisher of the literary magazine Maps. Former Professor of English and Director of the Interdisciplinary Arts Program at Shippensburg University, Taggart retired from teaching in 2001.
Loading...
or support indie stores by buying on