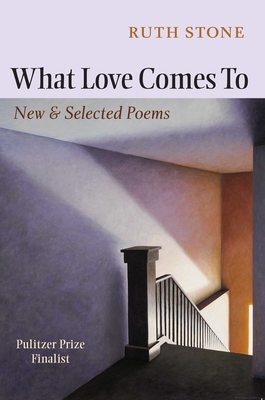 What Love Comes to

A collection of poems that give rich drama to ordinary experience, deepening our sense of what it means to be human.--Pulitzer Prize finalist citation

There is a broad, powerful streak of independence--even disobedience--that runs through Stone's writing and has inspired a great number of women after her.--Guardian

Finalist for the 2009 Pulitzer Prize, this retrospective of Ruth Stone's poetry combines the best work from twelve previous volumes with an abundance of new poems. This comprehensive selection includes early formal lyrics, fierce political poems, and meditations on her husband's suicide and her own blindness. As Sharon Olds says in her foreword, A Ruth Stone poem feels alive in the hands--ardent, independent, restless. What Love Comes To is a necessary collection from an American original.

Can it be that
memory is useless,
like a torn web
hanging in the wind?
Sometimes it billows
out, a full high gauze--


like a canopy.
But the air passes
through the rents
and it falls again and flaps
shapeless
like the ghost rag that it is--
hanging at the window
of an empty room.

Ruth Stone is the author of twelve books of poetry. Among her many awards are the National Book Award, the National Book Critics Circle Award, the Eric Mathieu King Award, a Whiting Award, and she was a finalist for the 2009 Pulitzer Prize. She taught creative writing at many universities, finally settling at SUNY Binghamton. She lives in Vermont.