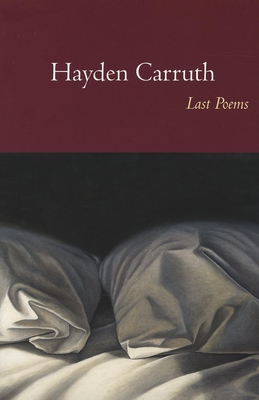 Something Hayden Carruth does as well as any writer is to treat the reader as a friend, and to provide, through his poetry, hours of good company.--The New York Times Book Review

One of the lasting literary signatures of our time.--Library Journal, starred review

Carruth, like Whitman, like Chaucer, is large--he contains multitudes. Dip into his work anywhere, and there is life--and death--as stirringly felt and cogitated as in some vast, Tolstoyan novel.--Booklist, starred review

Hayden Carruth's Last Poems is a triumph--a morally engaged, tender, and fearless volume that combines the last poems of his life with the concluding poems from each of his previous volumes. Introduced by Stephen Dobyns, Last Poems is a moving tribute to a towering and beloved figure in American poetry.

I don't know what fathers are
Supposed to do, although the calendar says
This is Father's Day. But the day is gloomy
And not at all conducive to visiting or
Celebrating. I know the best thing fathers in
Their prime can do is to make daughters and
More daughters; we can never have enough.
Daughters are our best protection against

Hayden Carruth (1921-2008) lived for many years in northern Vermont, then moved to upstate New York, where he taught at Syracuse University. He won the National Book Award for Scrambled Eggs & Whiskey, and his Collected Shorter Poems received the National Book Critics Circle Award.

Hayden Carruth: Hayden Carruth (1921-2008) lived for many years in northern Vermont, then moved to upstate New York, where he taught in the Graduate Creative Writing Program at Syracuse University. He published dozens of books of poetry, a novel, four books of criticism, and two anthologies. Carruth won the 1996 National Book Award for Scrambled Eggs & Whiskey, and his Collected Shorter Poems: 1946-1991 received the National Book Critics Circle Award. He served as the editor of Poetry, poetry editor of Harper's, and for twenty-five years an advisory editor of The Hudson Review. The Bollingen, Guggenheim, and Lannan Foundations, as well as the National Endowment for the Arts, awarded fellowships to Carruth, and he earned the Lenore Marshall/The Nation Prize, the Paterson Poetry Prize, the Vermont Governor's Medal, the Carl Sandburg Award, the Whiting Award, and the Ruth Lily Prize. Stephen Dobyns: Stephen Dobyns was born in Orange, New Jersey, in 1941. He graduated from Wayne State University and has an M.F.A. from the University of Iowa. Dobyns has published ten books of poetry and twenty-one novels, including the popular "Saratoga" crime novels. Dobyns has worked as a reporter for the Detroit News and has taught at the University of Iowa, Sarah Lawrence College, Warren Wilson College, Syracuse University, and Boston University. Among his many honors and awards are fellowships from the National Endowment for the Arts and the Guggenheim Foundation. Stephen Dobyns lives in Rhode Island with his wife and three children.
Loading...
or support indie stores by buying on