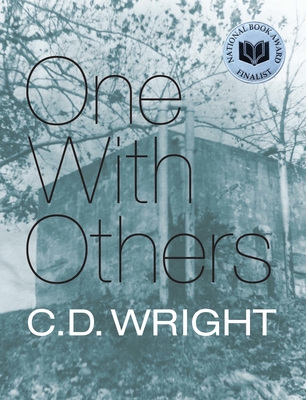 [a Little Book of Her Days]

Honored in "Best Books of the Year" listings from The New Yorker, National Public Radio, Library Journal, and The Huffington Post.

"One With Others represents Wright's most audacious experiment yet."--The New Yorker

" A] book . . . that defies description and discovers a powerful mode of its own."-- National Public Radio

" A] searing dissection of hate crimes and their malignant legacy."--Booklist

Today, Gentle Reader,
the sermon once again: "Segregation
After Death." Showers in the a.m.
The threat they say is moving from the east.
The sheriff's club says Not now. Not
nokindofhow. Not never. The children's
minds say Never waver. Air
fanned by a flock of hands in the old
funeral home where the meetings
were called because Mrs. Oliver
owned it free and clear], and
that selfsame air, sanctified
and doomed, rent with racism, and
it percolates up from the soil itself . . .

C.D. Wright has published over a dozen works of poetry and prose. Among her honors are the Griffin Poetry Prize and a MacArthur Fellowship. She teaches at Brown University and lives outside of Providence, Rhode Island.

C.D. Wright: C.D. Wright has published over a dozen works of poetry and prose, including the recent volumes One With Others, which was nominated for a National Book Award, One Big Self: An Investigation, and Rising Falling Hovering. Among her many honors are the Robert Creeley Award, the Griffin Poetry Prize, and a MacArthur Fellowship. She teaches at Brown University and lives outside of Providence, Rhode Island.
or support indie stores by buying on