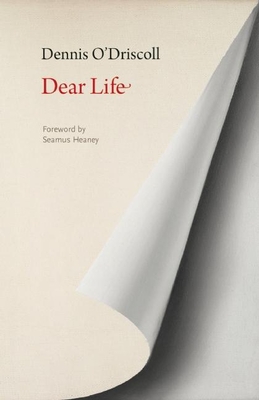 Dennis O'Driscoll's long devotion to the stripped-down idiom of Eastern European poets such as Miroslav Holub and Wislawa Szymborska and an American like Marianne Moore encouraged a style that opted for the plain before the elevated, the colloquial before the eloquent. Which is not to say that his work lacked seriousness: in its total alertness to the present moment, the cultural, social and economic life of contemporary Ireland, it was a unique phenomenon. If it was satirical - as it often is in Dear Life - it was not contemptuous. It registered the great spiritual changes that occurred during his lifetime, as the country moved from being a rural, religious, mainly agricultural place to an urban, suburban, secular destination for multinationals.--Seamus Heaney, from the Introduction

Dennis O'Driscoll has produced an extraordinary body of work. . . . Some of his poems have already achieved the status of classics.--Poetry Ireland Review

One] of the most interesting poets now writing in English. O'Driscoll's poetry has the rare virtue of making us feel that most other poets are forcing things a little, striving for effect. He writes directly, naturally, about the emotions that are closest to us and, for that very reason, go unobserved: how we actually feel about work and possessions and aging.--Slate

Irish poet Dennis O'Driscoll's new poems engage with contemporary issues--the internet era, the compensation culture, global warming--as well as the timeless topics of working and aging, loving and dying, God and Mammon. His poems give voice to twenty-first century Western attitudes towards religion, while the ambitious title-sequence attempts a rigorous exploration of the purpose of human life.

Back in hospital on this fateful date, but to no complications for once, I am discharged in good time to lighta candle on the kitchen table, decantyour Valentine's glass of sparkling wine, sear the steak, saut the onions, bakepotatoes till their paunchy waistcoats loosen, launch the gravy boat on its salt voyage, let mushrooms set sail on melting butter . . .

Dennis O'Driscoll (1954-2012) died suddenly on Christmas Eve, 2012. He was the author of nine collections of poetry as well as a book of interviews with Seamus Heaney, Stepping Stones. Poetry Review famously--and deservedly--called O'Driscoll one of the best-read men in the Western world.

Dennis O'Driscoll: Dennis O'Driscoll (1954-2012), a former editor of Poetry Ireland Review, was the author of nine collections of poetry as well as book of interviews with Seamus Heaney, Stepping Stones. Poetry Review famously (and deservedly) called O'Driscoll "one of the best-read men in the Western world."
Loading...
or support indie stores by buying on